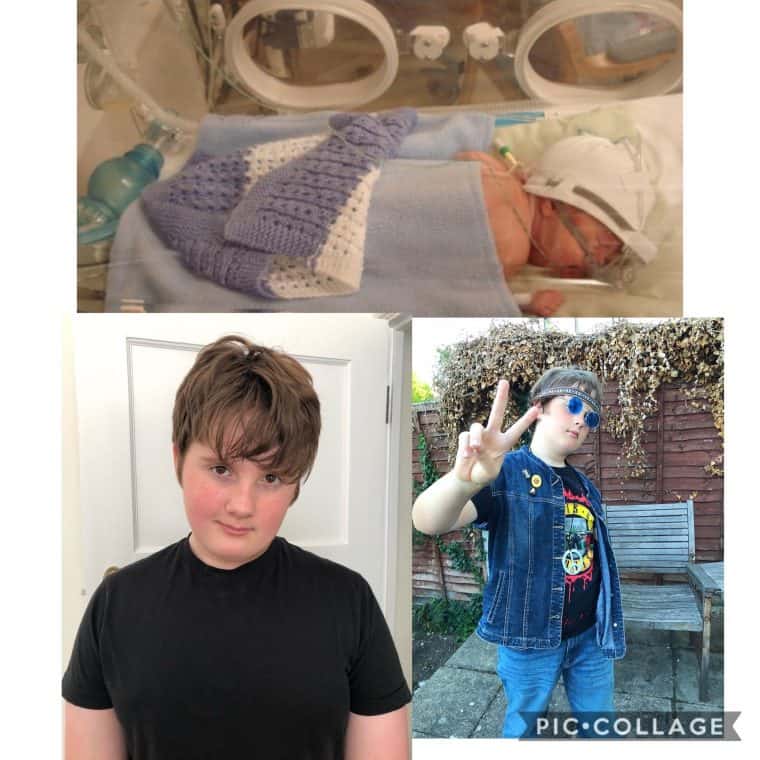 Mum Diana tells us “My son Zach was born at 32 weeks, I had no idea anything was wrong, my waters just went and next thing I knew I was being taken in to hospital. Nothing happened for a couple of days then I woke up one morning with just a gut feeling that something was wrong. I called one of the nurses and asked her to put the monitor on me, which she did. Zach’s heart rate was 200 indicating he was in distress. I had an emergency c-section and he was delivered within half an hour.

At birth Zach had Respiratory Distress Syndrome, Sepsis, meningitis and a bleed on his brain, he was immediately put on to a life support ventilator. He was tested for GBS and was positive. Luckily the consultant paediatrician at the birth knew all about GBS and assumed, correctly, that this was the problem and IV antibiotics were given to Zach within an hour of birth – that wonderful doctor saved Zach’s life I am sure of it.

Full term babies with GBS struggle, let alone a baby born at 32 weeks and his chances for survival in the first 24 hours were given as slim.

Zach was on the vent for 5 days and then moved on to CPAP for another week and then was breathing all on his own! He actually was discharged from hospital 2 weeks before his due date which is apparently quite an achievement for a poorly prem baby!

I was told his early arrival was due to the GBS infection. That is what caused my waters to break, so this is why he was already badly infected by the time he arrived. I had never been given any info about GBS or testing so was not even aware of it.

Zach remained under Queen Mary’s Children’s hospital for monitoring for several years. After 3 years he was discharged by the Development Consultant with the statement that he was “a standard issue 3 year old boy”

Zach is now 13 years old, 5ft 8 and a strapping lad who loves playing football, and of course his PS4 and Xbox ! He also seems to have a gift for drama and was cast as “Pop” in the school production of We Will Rock You a couple of years ago. He is going on to take Drama at GCSE.

When I think back now to that time, the memory is so clear and I can still feel the panic and fear when I was told my tiny baby had a life threatening infection and that he may not survive. It is so important to get tested, so you can take steps to make sure that you and your baby are protected if you test positive.

Since Zach’s birth I made a point of becoming informed on the subject of GBS and passing that knowledge on. I am acutely aware that not all babies have such a good outcome as Zach.”

Diana asked for donations in lieu of flowers at her fathers funeral service and raised £655. Diana said “Group B Strep Support was a cause close to Dad’s heart.  Dad was so proud of Zach and his achievements and was very aware that not every baby born with group B Strep has such a good outcome.”