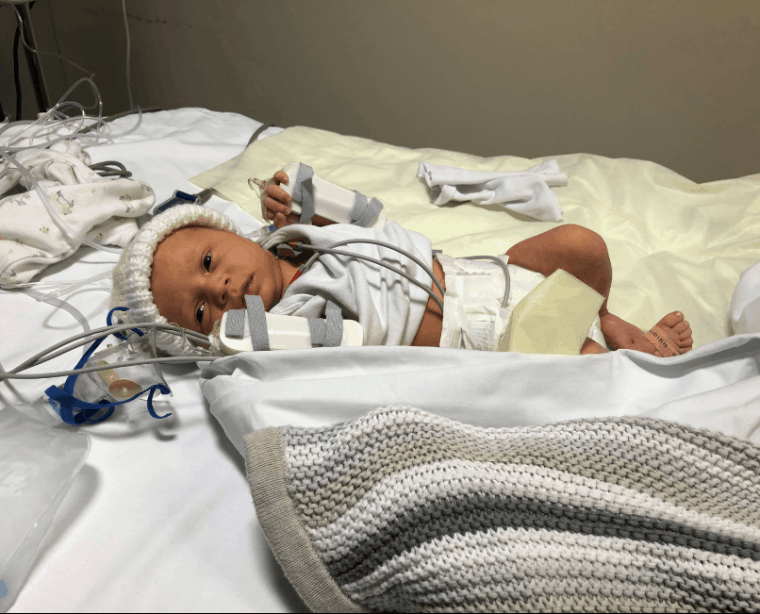 “17 days after having my little girl I noticed she was irritable all day and crying if moved or touched her. I put her to bed giving her a last feed at 10 pm and was woken with my breasts hurting because she had missed a feed. It was 4 am and she hadn’t fed for 6 hours! I woke her and she was just staring right past me making a grunting noise and was a green colour.

My partner and I took her straight to A&E where she was seen straight away and taken to a ward where she was treated for sepsis. She had a bubble blanket wrapped around her with constant warm air blowing to keep her temperature warm and had all sorts of medicine pumped into her. A doctor was called from Manchester hospital to come right away. This doctor later told us that he didn’t think she would still be with us by the time he reached our hospital which was only 30 minutes away.

We were told we brought her in just in time as they said she only had an hour to live when we brought her in. We found out the next day after a lumbar puncture that she had meningitis caused by me having group B Strep whilst pregnant and not knowing.

After 3 weeks of medication, Ivy was better and we are so grateful for the NHS and how they saved our babies life!

I’m now expecting our second baby in November and now knowing about group B Strep, I will be having a course of antibiotics as soon as I have any twinges that labour will be starting. I feel that my daughter being so ill could have been prevented if I knew about group B Strep. Every pregnant lady should know about it and get tested, so now I make it my mission to tell pregnant friends and family about the test.”