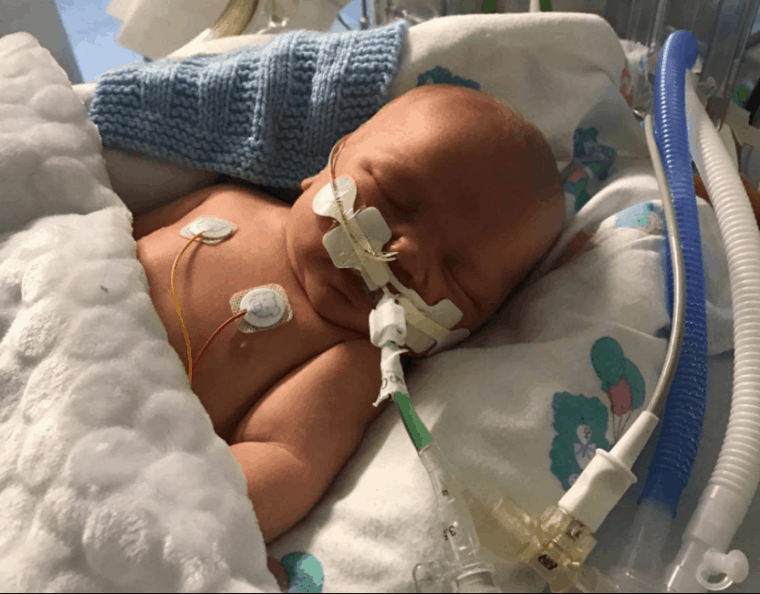 “This is Harry, and he was born on the 22nd of June 2020, three weeks early. I was induced due to Harry’s heart rate being slightly higher than normal when being monitored.

When Harry was born later that evening, he was in respiratory distress. He was a grey pale colour and sounded like he was grunting when taking breaths. I got told he was going to be taken to the neonatal unit to have a little bit more support with breathing and some tests run on him. After a heartbreaking two days, we got told that Harry had early-onset group B Strep sepsis and pneumonia. We also got told that his left lung had collapsed during birth and this was called Persistent Pulmonary Hypertension of the Newborn (PPHN).

Harry spent just over two weeks in the Neonatal Intensive Care Unit (NICU) where he required high-frequency oscillatory ventilation, that took over his breathing for him whilst his lungs repaired themselves and a central line for life-saving IV antibiotics. As Harry was so poorly, he was unable to have a lumbar puncture to test for meningitis, therefore he was treated for it anyway.

Harry has just turned one and so far has passed every examination with flying colours. Myself, our family and his consultants are amazed with his progress and have no concerns regarding his progress or for his future. We feel beyond blessed and proud of our little boy every single day for what he has overcome.”