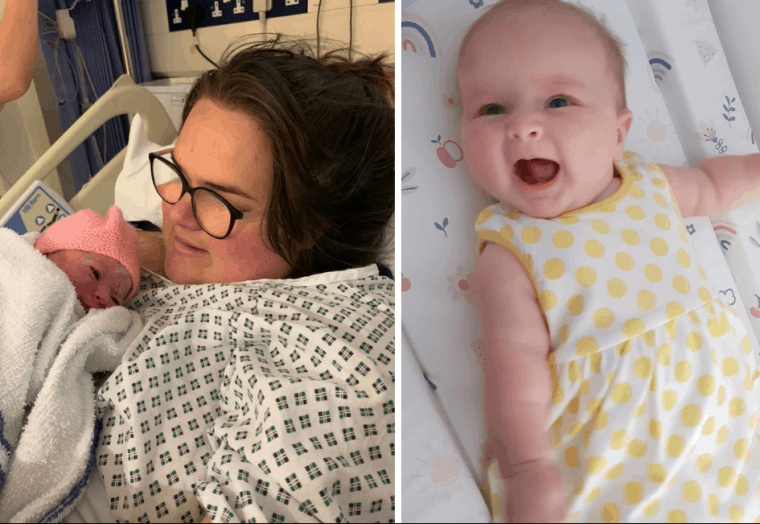 “I had no idea about group B Strep before or during my pregnancy until I had urine samples that kept coming back with ‘mixed organisms’ in. I kept getting prescribed antibiotics for a water infection but the fifth time this happened, I decided to call my doctor to get this checked and much to my surprise, the doctor informed me that I didn’t have the correct bacteria in my urine for a water infection and that I was to not take any further antibiotics.

I explained all of this to my Mum and she happened to mention getting tested for group B Strep. I asked my consultant and was told there’d be no point in getting tested but I was adamant I wanted to, so she agreed to make a note of this, but explained it wouldn’t be a thorough test. On my next visit to a different consultant, she noticed my notes about the mixed organisms and asked me about this. I mentioned group B Strep again and this consultant told me she highly recommended that I pay to get tested privately as a proper test isn’t available with the NHS. The consultant gave me the details for the Group B Strep Support website to order to ensure it was the correct and legitimate test. The consultant at the hospital did also take some swabs and told me I would receive a letter or a phone call with my results but I never received a letter or a  phone call so to this day, so I’m really glad I tested privately using the ECM test.

At 37 weeks pregnant (one week before I gave birth!), I was devastated when the test results came back positive and had no idea what I needed to do. Luckily the Group B Strep Support group and a friend of mine (who had group B Strep when she was pregnant) helped so much and I felt at ease already knowing I’d had the test and I could prepare for my labour.

I started having contractions at 6am on Sunday the 11th April 2021 and rang the hospital straight away who informed me I couldn’t go in until my waters had broken. I didn’t know if they had or not so I was obviously terrified and explained this to the midwife, but they still refused to allow me in until my contractions were closer together. I had also explained that I was GBS positive, but the midwife didn’t seem concerned by this. By 8.30 am, I rang again and they agreed to let me in. I was put on the antibiotics IV drip straight away and made sure everyone knew I was group B Strep positive using my stickers I had ordered from the Group B Strep Support website – these were a huge help.

9 hours and 19 minutes later our beautiful baby girl arrived safely and healthy. Rosie is now 12 weeks old, and I am so grateful that I found out and got tested for GBS. The thought of what might have happened if I didn’t know, or I’d listened to the first consultant who told me not to bother is unbearable.