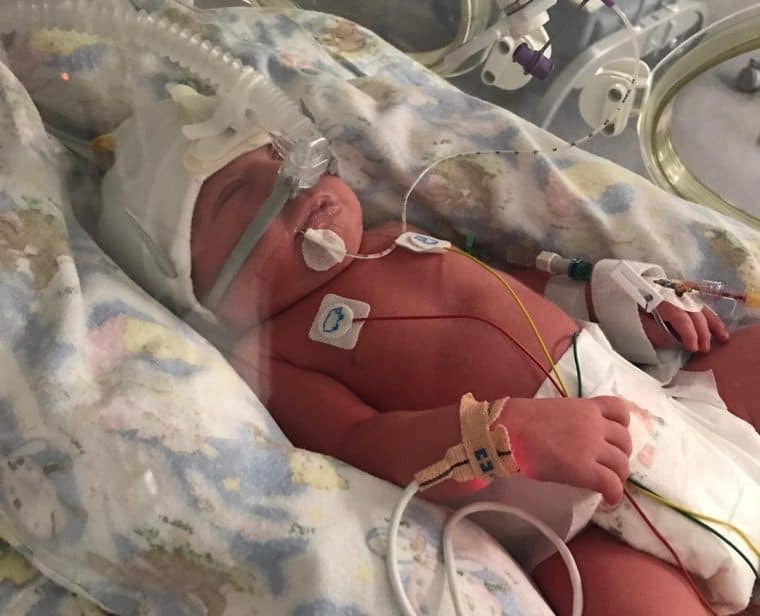 “Emily was born on January 1st 2020, along with her twin sister Sophia. Until then, I had never heard of group B Strep and had no idea what it was. At 36+4 weeks pregnant on December 31st, I was taken into hospital to be induced as I was showing signs of pre-eclampsia. I was induced around 1pm on the 31st and Emily arrived at 5:17pm the following evening, weighing 6lbs 3oz. Her sister, coming almost two hours later at 7:02pm weighing 5lbs 9oz. Healthy weights for twins.

On arrival, both little ones had trouble breathing and were taken straight to NICU and put into incubators. I lost just over 4 pints of blood and needed a blood transfusion therefore was unable to see the girls until 3 in the morning.

The next day, I was advised Sophia would be coming up to me around 11am with Emily following shortly after as they were now breathing on their own. 11am came and Sophia arrived, what a delight! However, I was concerned as they had told me Emily might be a little longer.

Time had passed and we received a visit from the consultant advising Emily had to be put back into the incubator as she was showing an infection in her blood. My heart sank! All I wanted was for both my girls to be together and to be able to go home. It was then to be confirmed it was in fact group B Strep.

Emily was in ICU for two further days whilst Sophia and I were up in the ward. I was splitting myself in two trying to be at the ward with Sophia, spending as much time as I could with Emily in ICU and also recover myself. Following her few days in ICU, finally as a family, we got moved to SCBU, meaning our girls were reunited. Emily, who was still very poorly, however, was out of her incubator and showing positive signs. Both my partner and I were able to stay overnight in the hospital with them both. It was an extremely traumatic time, the guilt overwhelmed me. But luckily our little Emily was a fighter. After a long, worrying two weeks of tests, lumbar punctures and antibiotics, Emily made a full recovery and we were all discharged and made our way home as a family of four. Upon further checks, our Health Visitor and Consultant advised Emily no longer needed any additional care.

Group B Strep needs to be recognised more. We are forever in debt to the doctors, nurses, midwives etc who cared for Emily.”