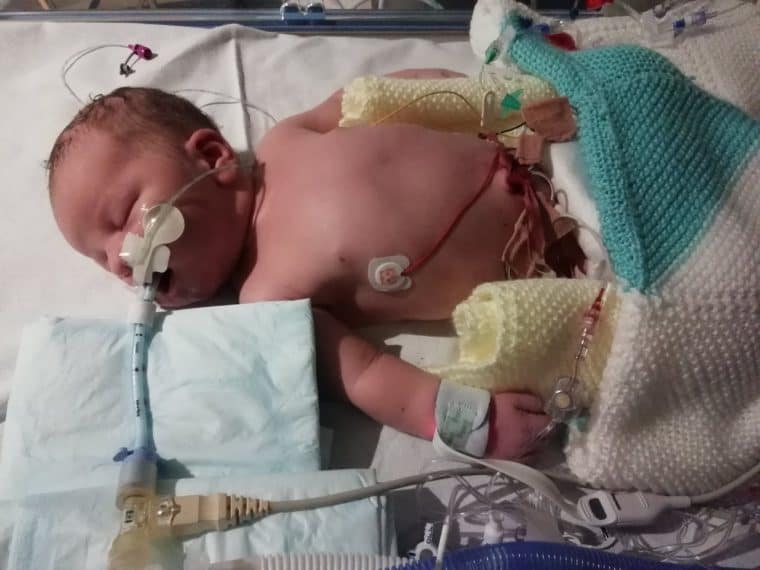 On the afternoon of 02/09/18 I went to the hospital to be checked over as I thought my waters may have been leaking. I was told it was not my waters and they gave me a 2nd stretch and sweep and took a urine sample. I went into labour that evening around 5:30pm. I stayed overnight on a ward to be monitored and was given pain relief. 8am 03/09/18 a midwife examined me and accidentally broke my waters. I was taken to the labour ward where I was given an epidural which allowed me to sleep for a few hours. When I woke I was trembling and clammy. I had not passed any urine for hours so I was given IV antibiotics as a precaution (roughly 1pm).

Henry’s heart rate kept dropping very low so they decided to put a clip onto his head to enable them to take more accurate recordings. At around 6pm I was examined and told that I was almost fully dilated and needed to begin pushing. I was told that the baby was getting tired and they needed to get him out as soon as possible. As soon as I began pushing, Henry’s heartrate dropped dangerously low. The midwife pulled the red emergency button and a stampede of people ran into my room. An anaesthetist gave me a spinal block whilst my legs were put into stirrups and the end of the bed was removed. I was given an extended episiotomy and Henry was pulled from me using forceps. They passed him over the drape and placed him onto my tummy. He was a purple colour and limp. He was opening his mouth and trying to gasp for air. I rubbed him vigorously with the towel he was wrapped in and encouraged him to take his first breath – he didn’t. The emergency buzzer was pulled again and the Neonatal consultants took over. They spent 40 minutes in the room with us, performing CPR and administering lifesaving medication before intubating him and whisking him away to NICU.

The consultant returned once they had settled Henry on NICU, she said something that will stay with us forever.

“Would Dad like to come and take some pictures of baby to show Mum? You have had an incredibly poorly baby and we are unsure whether he will survive the night”.

We were in complete shock and denial. Our world came crashing down around us within the space of an hour.

I wasn’t allowed to move until I had the feeling back in my legs so I just laid there, staring up at the ceiling wondering whether I’d have the opportunity to meet my boy before he passed away.

1am 04/09/18 – The midwives took me to visit Henry, they put my wheelchair at his bed side and left me to sit with my son. It was dark and very quiet, the only light / sound came from the machines. I couldn’t believe how big he looked in his cot, how much hair he had and how perfect the dimple was in his chin.

I sat at his bedside night and day, expressing breast milk every three hours around the clock to ensure he had the best chance of fighting the infection. We were told on day two that Henry had Strep B and Sepsis; the infection had shown up in my previous urine samples. It had consumed his little body but he was putting up an amazing fight and as each hour passed his condition improved. He underwent two lumbar punctures on day three to rule out meningitis and had a brain scan which thankfully showed no brain damage.

On day four Henry’s intubation was removed and he began to breathe for himself.

On day five Henry graduated from NICU to HDU. We were finally allowed to hold him and be more hands on with his “cares” such as cleaning him with cotton wool, mouth care and nappy changes.

By day seven, Henry was ready to move on to SCBU. The nurses fussed over him as he was such a big chubby baby, at 8lb 11oz – he was enormous in comparison to all of the tiny premature babies. Day seven was also the first time we were allowed to put clothing on him as his temperature had come down. The only wires left were his NG tube, o2 monitor and 1 cannula left in his arm. It felt wonderful to be able to respond to his cries by picking him up and comforting him, without asking for help to move wires and tubes. I spent hours walking up and down the room rocking him just because I could now.

We were given a bedroom on the ward on day seven so we could be closer to Henry and I could breast feed him on demand. Henry then decided it was time to remove his own NG tube!

On day eight Henry was allowed to stay in our room overnight. We were thrilled but also terrified – no more machines to tell us he was okay – we just had to trust our instincts. We also had to keep a written record of feeding and nappy changes to ensure his input and output was okay. On day ten Henry had his hearing test and this confirmed no issues with his hearing. Henry was given a clean bill of health, ready for discharge by the Neonatal consultant.

Henry miraculously has come out of this unscathed. He continues to amaze us every day.

I have found Group B Strep Support to be vital for understanding the infection, stages and signs. I follow the group on social media and regularly share / retweet information in the hope it raises awareness.

Before Henry we had never heard of group B Strep. If we ever decide to have any more children, we have been told we will need consultant-led care and IV antibiotics as soon as labour begins. I hope that reading this story will provide awareness for other parents to be, and I encourage any pregnant woman to source a group B Strep test if it is not made available to them through NHS.

A simple test – had I known about it could have prevented such a traumatic event for us all. Henry’s birth has changed both of us as people irreversibly.

We are thankful for every second we have with our trooper. And forever in debt to the consultants, doctors, nurses and midwives who saved our lives.