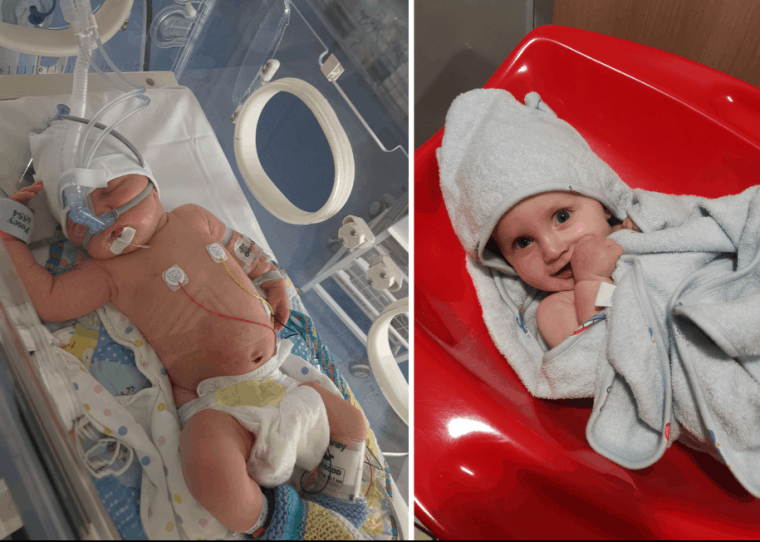 “My son Charlie is now 7 months old. Both myself and my fiancé (Charlie’s dad) are both medical professionals. As a nurse and a paramedic, we thought we knew the signs and symptoms of a sick baby, but we realised how easily they can be missed.

At 7 days old it was our first family day out and getting Charlie registered. Charlie was being fussy and not feeding great in the day, but with him being breast-fed we thought it was normal. That evening Charlie was settled in his chair when I noticed he was making funny noises, but we thought maybe he was constipated or tired. Very quickly his breathing changed. We called the maternity unit for advice who said to come into the unit right away. We learnt afterwards that we should have been advised to call an ambulance and go straight to A&E.

The hospital was not far away. However, due to coming during handover, we had to wait 20 minutes before we were allowed on the unit with myself explaining again and again that my son was grunting and not breathing properly. Due to the pandemic, Tom was not allowed in the building and I was on my own.

Eventually a midwife came to get us and conducted a set of observations on Charlie. After this everything happened very quickly! Charlie’s heart rate was 260 and his respiration was in the 60s and he was at risk of cardiac/respiratory arrest. A doctor quickly came and put out an emergency call. Charlie was surrounded by doctors and nurses and rushed to Neonatal Intensive Care Unit (NICU).

In NICU Charlie was put on NIV with Continuous Positive Airway Pressure (CPAP) to support his breathing and monitoring equipment including a nasogastric tube (NG tube) for his feeding and had to pump Charlie milk, which was heartbreaking after finally establishing good feeding.

In the 2 weeks that followed, Charlie was weaned of the equipment to help with his breathing and was on IV antibiotics. He also had to have 2 lumbar punctures to check for meningitis which was thankfully negative. However, during these 2 weeks I was alone, Tom was not allowed to come on to the ward because of Covid restrictions. So Charlie and his dad spent 2 weeks separated from each other until we were allowed to come home again. Charlie is 7 months old now and healthy, however, I’m still under a consultant to ensure he doesn’t have any long-term effects.

Throughout my pregnancy I was never informed about group B Strep or offered IV antibiotics in labour. I had Charlie at home, as I had none of the risk factors for GBS.

One of the hardest parts of this was feeling that as a nurse and a paramedic we should have been able to see the signs and have acted quicker, but you never think it’s going to be your child that gets sick. We were told that if we hadn’t come in when we did Charlie would have died. We are just so glad we got the help we did.”