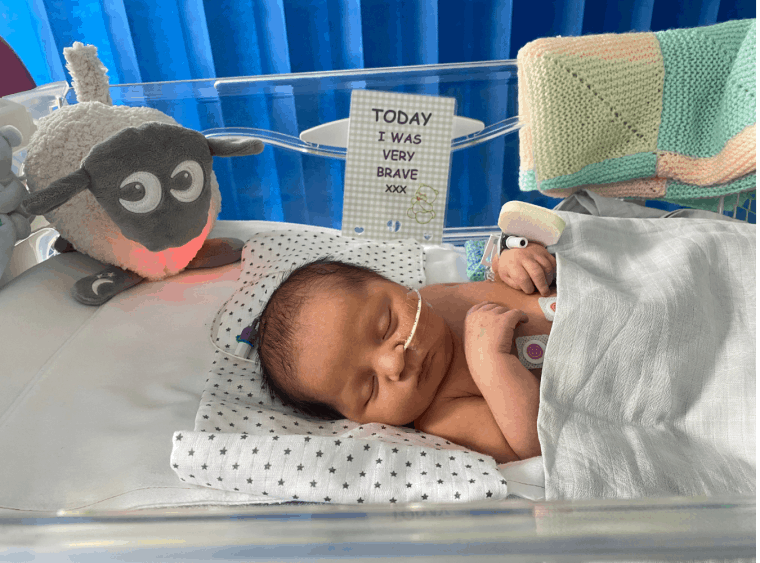 “I was induced at 38 + 2 weeks as I had high blood pressure and reduced movements. Within a few hours of Jenson being born the midwife took his blood sugar levels and they came back that they were 0.9 the doctor gave him some glucose and as I had taken medication known to lower baby’s blood sugar we were left for a few hours but when they checked again they had dropped to 0.6.

Jenson was then taken to the Neonatal Intensive Care Unit (NICU). I was alone in my cubicle not really understanding what had happened and just wanting to see my baby. Whilst he was in the NICU they found that he also had pneumonia. I was really scared and being alone due to the virus restrictions made it even worse.

The doctors gave him antibiotics and then when his results came back we found out that he had group B Strep infection and Sepsis. When you hear those things, you just think the worst!

It was a really scary time and I had never heard of GBS –  I Googled what it was, but I was just reading lots of awful things so the nurses found me some leaflets and told me about this website.

Jenson was given antibiotics for 10 days and we both stayed in hospital. The nurses were really great at looking after both of us. I was crying a lot and finding it hard being alone in hospital with my poorly baby, but each day Jenson got better!

We were allowed home after 11 days! I am so proud of him and how strong he was. He hardly even cried during all of it, including when having a lumbar puncture. He is now doing so well.

Since then, I have been reaching out to pregnant women urging them to order the test, if I can help one other, it is so worth it.”