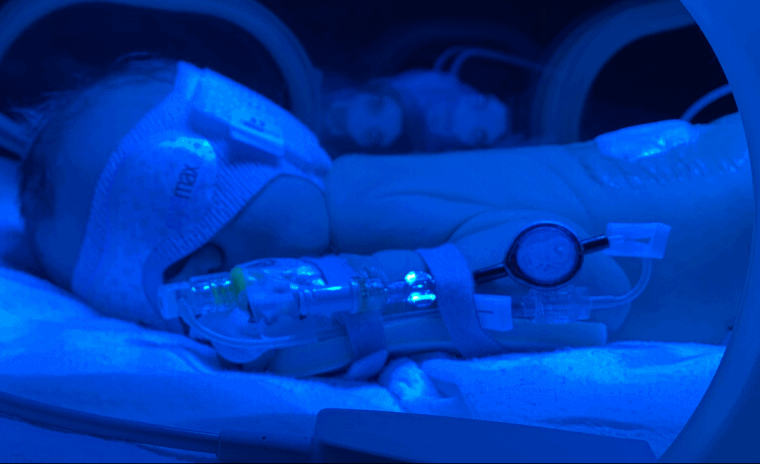 “Mason was born 3 weeks early by emergency C-section after a failed induction. Soon after his birth, it was quite clear something wasn’t quite right as he was grunting, his cry was very high pitched and he had low blood sugar.

I couldn’t quite comprehend at the time what was happening, as soon after the section I turned septic and was really poorly myself. All I remember is that they took Mason away from me and to the neonatal unit. Because I had sepsis, they took bloods from Mason too and started him on antibiotics as a precaution. I’m so glad the doctors and midwives were on the ball, as a few days later when I was well enough to be understand what had happened, they told me that I had group B Strep and had passed it onto Mason in labour when my waters had been broken.

Unfortunately, when we got the results back from Mason’s lumbar puncture it showed he had bacterial meningitis. After 3 weeks of IV antibiotics, Mason was allowed home and now at 7 weeks old he is doing really well. His hearing test came back normal and we are hoping that he has no long-lasting effects. We are just so very grateful that it was picked up on straight away and could be treated.

I really don’t understand why they don’t routinely test expectant mothers for GBS in the run up-to their due date and labour. Prior to Mason being born I’d never really heard of it. I want to do everything I can now to raise awareness and try to prevent this happening to anybody else.

Thank you for letting me tell our story.”