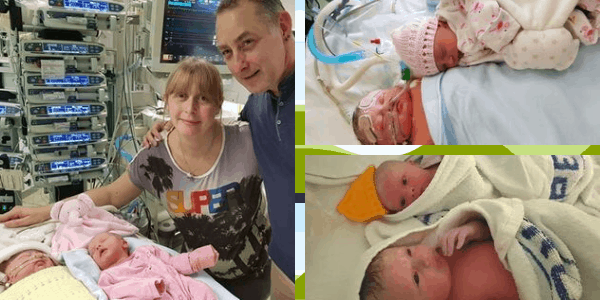 Dawn Powell gave birth to twins at The Queen Mother Hospital in Margate but lost her little boy Archie at four days old.

Dawn recalls “While I was delivering Archie he began making grunting noises, which I know now is a tell-tale sign of strep B. The medical staff in the labour room picked up on it but I don’t think it immediately caused them alarm. Later that day little Archie’s body temperature dropped and he was moved to an incubator. He became floppy, unresponsive, irritable and his skin was mottled. We were told he may not make it through the night.

Medics then decided to move him to intensive care at St Thomas’ in London. They warned us that he may be too ill for the transfer or that he may not survive the journey. That’s when we knew the situation was very serious. After he was transferred, we began to feel that Archie might pull through. I went to see him, his tiny body with so many wires coming out of him, hooked up to machines. I could feel him squeeze my finger and he opened his eyes. It gave me hope that he would make it.

But doctors carried out a PET scan which revealed bad news. He was very brain damaged and would be unable to see, hear or speak.  The doctors gave us the choice but they said Archie would have no quality of life.  We knew the kindest thing was to let him go and made the heart-breaking decision to switch off his life support when he was just four days old on February 14 this year.

Losing Archie is a pain I’ll always carry with me. Every time his twin sister Evalene reaches a new milestone – learning to walk, starting school – I’ll think ‘Archie should be here beside her’.”