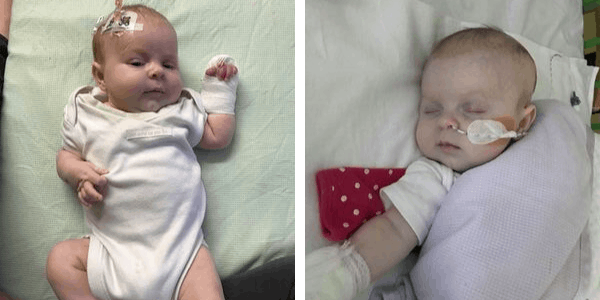 Mum Chelsea writes “I was 35 weeks when I was found with GBS in a vaginal swab. I was told I’d receive antibiotics and baby would be safe with 24 hours of monitoring but nobody warned me of the late-onset of GBS. I give birth to a healthy little girl Amelia-Grace at 39 weeks and only received one dose of antibiotics.

We were monitored for 24 hours and then sent home with the all clear but that wasn’t the end of it. At three weeks old Amelia became unwell and was taken into hospital where she was found with late-onset GBS sepsis.

This was just the start of a long fight with many complications but we finally got the all clear after two and a half long weeks. Little did anyone know we would be returning within a week as she became poorly again. She had many cannulas, NG tubes and lumbar punctures but she beat GBS sepsis not once but twice!!”