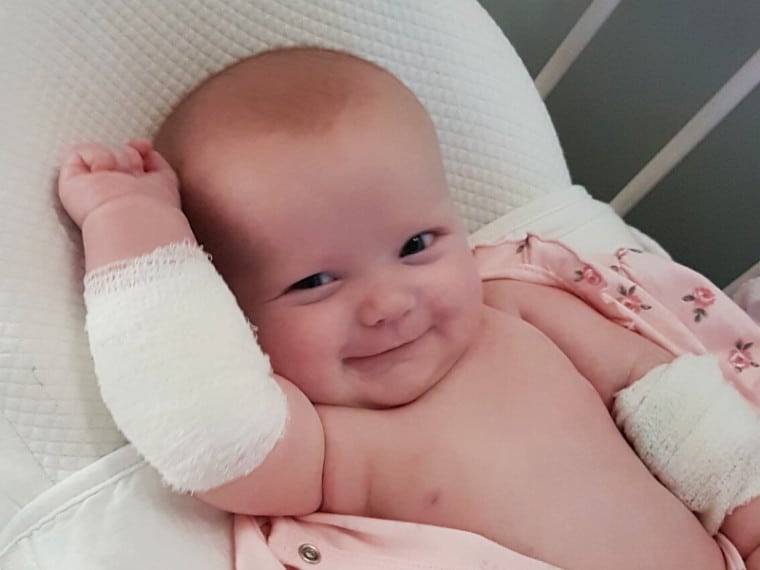 I’d heard about group B Strep in passing and seen the test kits when we went for our 4d scans but never really took much notice of it, thinking ” ah that’ll never happen to me” and “they’d sell you anything to make a quid”.  How wrong I was.

At 9 weeks old, Alanna woke as she always did, smiling. I could hear her making noises in the cot at the end of our bed. So I got up and picked her up smiling back at my baby girl and thinking “wow aren’t you just beautiful to wake up to!”

I placed her on the changing table, and changed her nappy noting how red her little bottom was getting and how strong the smell of her pee was. It could have knocked you out that morning.
She was still smiling up at me and stretching her long legs and arms out and reached up to me to be lifted. I lifted her and brought her downstairs with me, talking about the sunshine and how she was going to stay with her aunty Trisha and uncle Mickey that night and all her cousins and how she loved it there as they all spoil her rotten as mummy and daddy were heading away for the night to stay with our good friends for the night.

Alanna was babbling back and forth to me in the kitchen whilst I got her bottle ready. Usually she eats and sucks the fists off herself in eager anticipation for her bottle but this morning she didn’t seem too fussed on whether she was getting a bottle or not.  She took an ounce by 10am. Usually by this time of the morning she had easily guzzled two 5oz bottles from 7am.

At 10.30am her daddy Eamon was going to our new house to see the progress on the building works he and Alanna were smiling and giggling together like the best of friends in the world. He headed off at 10.50 am and I gave Alanna another 3oz of formula and left her with my mum to be burped and settled for a wee nap whilst I got her things packed up to go to my sister and brother in law’s house for the night.

I was only upstairs 2 mins when the screaming and whinging started. I thought “ah wee pet can’t get her wind up I’ll maybe give her a drop of (boiled cooled)) water help get it up for her. The constant crying had faded out as I lifted her things down the stairs. She was lying twitching and jerking (she usually jerks to try and help herself burp) with her eyes closed on her grannies chest. I lifted her to try and wind her and the wailing started again.

“Ah Alanna are you full of wind?” I cooed, and patted her back but no wind came up. It was 12pm now, at this stage and my mum suggested to give her a bath and try and help calm her cries and help bring the wind up out of her belly. I filled up her bath and when I was undressing her she really became distressed and was looking at me with eyes that were quite confused looking. She was not her usual smiling self and I thought for a second “you don’t look like my Alanna wee woman you look unwell and I don’t want to leave you tonight at all”. She screamed and flailed about in her tub and got even more distressed when I began to dry her.

I was starting to really worry now as this was all so out of character for our baby girl. Alanna had been crying and unsettled almost two hours. She feeds every 1-2 hrs usually as she sleeps from 8pm-9am every night from she was 7 weeks. “Ah you’re hungry wee woman again!” As I had a lightbulb moment I heated up another bottle and raised it to her lips. She point blank refused it.
I popped her in the baby sling and walked about with her up and down the stairs as that sometimes clears her wind. She seemed to have settled now so I sat down with her on my chest.

The screaming started again. “What am I doing wrong wee woman?!” I was becoming exasperated. “She never cries like this Eamon” I looked at my husband and he was as confused as I was. He says sure let me try and take her. He lifted her out of my arms and sang and rocked her she seemed to calm but the minute he stopped she started again. At this point it was nearly 2pm.

“Eamon, colic usually passes after 4 hrs if she doesn’t settle soon I’m taking her to the hospital”. He agreed with me it was so out of character for her. Her screaming had now changed to a moaning like sound and I touched her left arm and she started to scream again. That was when I noticed it.

She’d no reflex in that arm, I could feel the panic starting to surge in me. I touched her arm again, there was nothing it was completely limp and I looked to her other limbs as the wailing began again. They were all limp, they were all cold… They looked grey. I started to cry ” oh my god Eamon her arm it’s not right oh my god oh my god there’s something wrong we need to get her to the hospital now”

At 2.10pm we were in the car and on our way to Craigavon area hospital where we were seen within minutes of arriving. I kept trying to reassure myself I was being over anxious it was probably just an off day, but she never had off days… She was such a good content baby.

At the hospital they did blood tests on Alanna who at this stage hadn’t opened her eyes alertly since 11am bar when she was placed on the changing mat before the bath. The doctors asked questions and intently listened and wrote down my answers.

At 2.45pm the curtains were pulled and a tall man in blue scrubs introduced himself as Dr Damien and told us he would be admitting Alanna on the basis of her instant blood results. He explained everything calmly and said we suspect it could be just a urinary tract infection and as she hasn’t had her vaccinations yet we will need to get her some antibiotics. We trusted him instantly with our baby girl. He led us around to the new paediatric ward at Craigavon area hospital and into the treatment room.

Dr Damien told us he would have to perform a lumbar puncture on Alanna as it was precautionary with her high temp and heart rate to treat for meningitis and sepsis but he suspected it was just a urinary infection as he’d mentioned earlier to us. We gave our consent and went to the parents room to wait on our baby girl. As we walked into the room we could hear her start to scream. We just looked at each other, hugged and sobbed uncontrollably for what seemed like hours but was probably only a few minutes.

Eamon looked at me and said “what the actual hell, our Alanna is never like that. He said meningitis!” I tried to calm him down and reiterated that it was precautionary to treat her for that on the basis of being safe than sorry. He nodded looking as unconvinced as I was feeling.

Eventually, Dr Damien came in carrying Alanna looking disheartened, “I’m so so so sorry the lumbar puncture failed. It’s the first to fail in a long long time for me. I’m absolutely gutted to have to put her through that with no result. We will have to repeat it tomorrow again”. He brought us around to her room for the next few days and explained what had happened and what they would do. When he left the room I asked Eamon, “did he say she was septic ?!” Eamon nodded swallowing back the tears as I burst into tears while trying to comfort my baby girl who was also sobbing with her eyes still closed.

The nurses came and set up the IV drip line and the drugs were started at 6pm, by 6.50pm we seen her blue eyes opened again. Our baby girl looked disorientated but she had her eyes open again.

The next morning we were told it was group B Strep that had grown on her blood cultures. She had Sepsis but we had caught it early, very early !

I burst into tears again in front of the doctors and nurses, I felt heartbroken. I felt like I was the reason for my baby’s suffering. The lady doctor hugged me and gave me a tissue and reassured me it wasn’t my fault and that in our baby’s case it was very rare late-onset sepsis and especially rare at nearly 10 weeks.

Over the course of the next few days Alanna had another lumbar puncture, a long line drip inserted, numerous antibiotic IVs. This was it being caught early and being treated within a 6hr time span, I shudder to think of the treatment if it had been left any later.

Alanna is home now thank God! We still have to get her antibiotics 4 times a day twice over at the hospital and twice at home.

Group B Strep Sepsis. Know the symptoms and save a life.