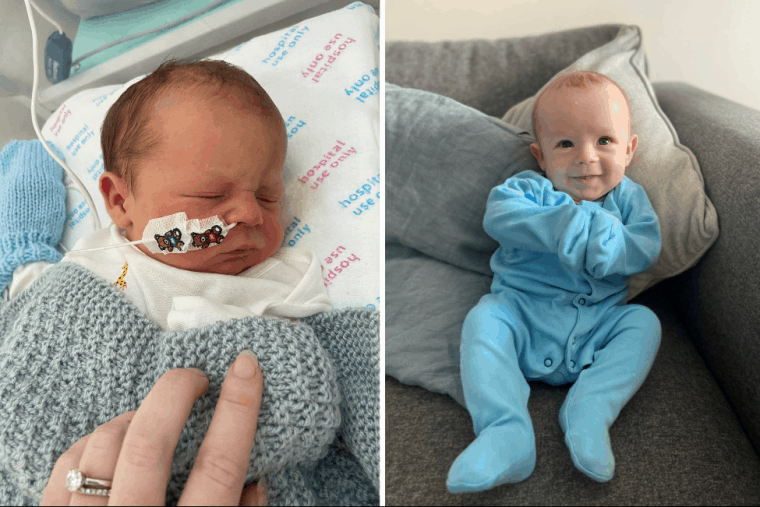 “The midwives detected that I had developed an infection towards the end of my labour which we later found out was group B Strep. I was immediately placed on IV antibiotics, although my waters had already broken several hours earlier. Once my son, Liam, was born his blood was tested as a precaution, however, and it was found that he had raised infection markers and was also given IV antibiotics.

The following day, Liam was not feeding well and was very sleepy, so the doctors decided to carry out a lumbar puncture which resulted in a diagnosis of meningitis from early-onset GBS. We spent the next 2 weeks in hospital with Liam in the NICU receiving IV antibiotics twice a day and a feeding tube as he was still too weak to feed himself. It was without a doubt the scariest 2 weeks of our lives and something I never imagined happening to us.

Thankfully, Liam made a full recovery and is now a very happy and healthy 3-month-old. I am so grateful to the midwives and doctors for detecting, diagnosing and treating Liam so swiftly, however, I feel enormous amounts of guilt knowing now that this may have been prevented with a simple test during my pregnancy. I did not receive any information whatsoever on group B Strep throughout my pregnancy – in fact I had never even heard of it before this happened. I’m sure there are so many pregnant mums out there that are also unaware that they could be carriers and the dangers this could pose to their babies so I hope sharing my story can raise awareness and encourage mums-to-be to discuss the risks of group B strep with their midwives.”