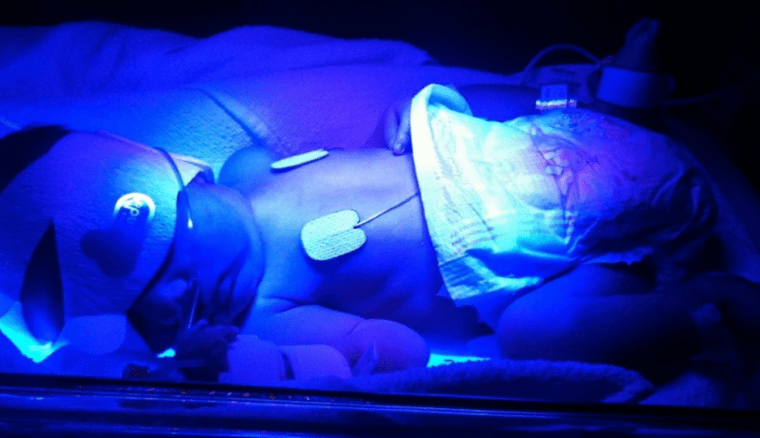 “I went into labour at 34 weeks the same day my dad had a heart attack. I was adamant that I wasn’t in labour as I only had a sore back. Anyhow, our beautiful baby boy arrived nearly 6.5 weeks early weighing a healthy 6lb 1.5 and 54cm. Everything seemed normal. We were staying overnight so dad went home. By this time we were on the ward. But as the night went by something wasn’t right. He wasn’t feeding, his chest was going at a ridiculous rate and the peadiatric team stepped in. Went straight to the neo natal ward. Didn’t know what to do.

Waited ages for any info but when they came to see me confirmed Strep B, 2 right-sided lung infections, bleed on the brain and told the next 48 hours were crucial. Started on antibiotics. Hadn’t prayed for a long time but I did that night. Those 48 hours felt like forever. And on day 3 he had improved slightly, but it was a step forward. The next 2 weeks were the longest. I had to go home after the first week and leave my baby behind, hardest thing I’ve ever done. But he had an amazing team looking after him. And after a big fight he was fit to come home.

That’s when the fun started. He has been under paediatric team from birth and turned 10 in November 2020. He is not without his health issues, but he doesn’t know any different. He does know how special he is though. He has lots to deal with daily. And new things pop up every so often. But I’m lucky I got to bring my baby home. And yep life is hard-going with hospital visits and appointments, but he takes it in his stride and to look at him you would never know. He’s taller than most 10-year-olds and doesn’t let anything stop him. I’d never heard of Strep B until the doctor came to speak to me that day and told me I was a carrier. This also put me off having anymore babies, as I’d already had one prem baby and a very quick labour. I now know you need antibiotics during labour. My boy is happy and that’s all that matters.”