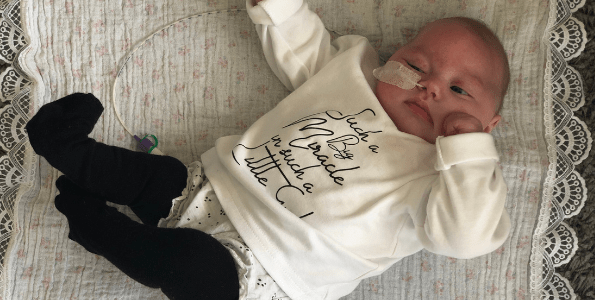 Bethany Foss had not heard of group B Strep when she was admitted to the Royal Devon and Exeter Hospital to give birth. Bethany believes her daughter’s future would have been very different if she had been tested for group B Strep.

Bethany’s daughter, Daisey-May Moore, was born on 30 October 2018 at 38 weeks, weighing 5lb 6oz. It soon became clear that she was seriously ill.

Bethany said: “Daisey-May seemed absolutely fine at first and was with me on the ward, but after 24 hours I noticed that she was grunting when she breathed. Soon after, I was told she had group B Strep sepsis and meningitis and to prepare for the worst. It was the worst time of our lives. We were in total shock and disbelief as to how our baby could have been born so normal and perfect, then in the space of 24 hours be so near to death.

“We ended up being moved to a different hospital, which was better equipped, but that was hard for us as we were then even further away from our other two children (Noah, 3, and Leo, 2).  Every day felt like a miracle and eventually they stabilised Daisey-May enough to take her off her ventilator and to everyone’s amazement she started breathing.

“We know from an MRI scan that Daisey-May’s brain has been very badly damaged. We don’t know yet how she will be affected in the future and what she will and won’t be able to do. She also has epilepsy and is on three different medications to control her seizures,” Bethany continued.

Daisey-May was in hospital for three weeks altogether, coming home on 25 November 2018, where she is now being looked after by her parents with the help of specialist care.

“We’re grateful for every day with Daisey-May, and everything she does is amazing, but we’d not heard of group B Strep until Daisey-May’s birth, despite her being our third child. I was never offered information or a test for group B Strep when I was pregnant, whereas this would have been done automatically in most developed countries.

“The whole experience has been highly traumatic. Nobody should have to have discussions about their new baby’s life when the infection they’re suffering from could so easily have been prevented,” continued Bethany Foss.