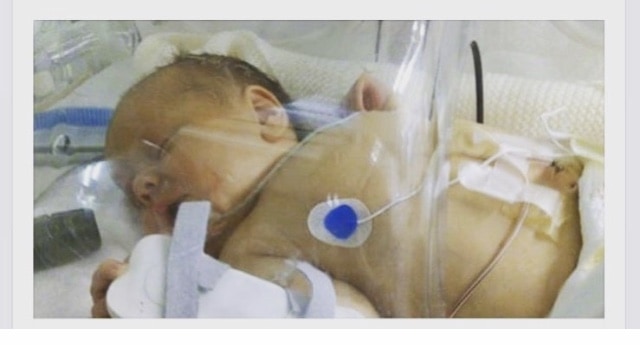 My 2nd son’s pregnancy was fairly normal. I was induced due to itching. A long labour, waters were broken and not much happened. I spoke about a C section then things progressed, and Liam was born.

He didn’t really feed well but I was taken back to my room where I slept and was woken by a very unsettled baby. I contacted the midwife, who took Liam away to check on him. I dozed off and woke up to a message my son had been taken to neonatal. I had a small Polaroid picture next to me of Liam with wires on him. I walked slowly down to neonatal, not knowing what to expect. Liam had been admitted with low oxygen levels. I couldn’t hold him as he needed air. Days went by – a blood transfusion, a lumbar puncture…

…I eventually got to hold Liam, but had to keep a mask to his face. He got moved through nursery 1 to 4, then 7, then they said we could go home. I was swabbed before being discharged. I had showed up positive for group B Strep. Liam had contracted pneumonia.

I felt so bad that I had made my son sick and didn’t know what strep B was. When I found out that it could have been prevented, it made me want to educate people about this silent killer.

Thankfully, Liam recovered well. I went into have my daughter whose temp spiked after birth despite antibiotics in labour. She went on to being observed in neonatal and kept in for a week on antibiotics as a precaution. This gave me really bad anxiety about having any more children.”