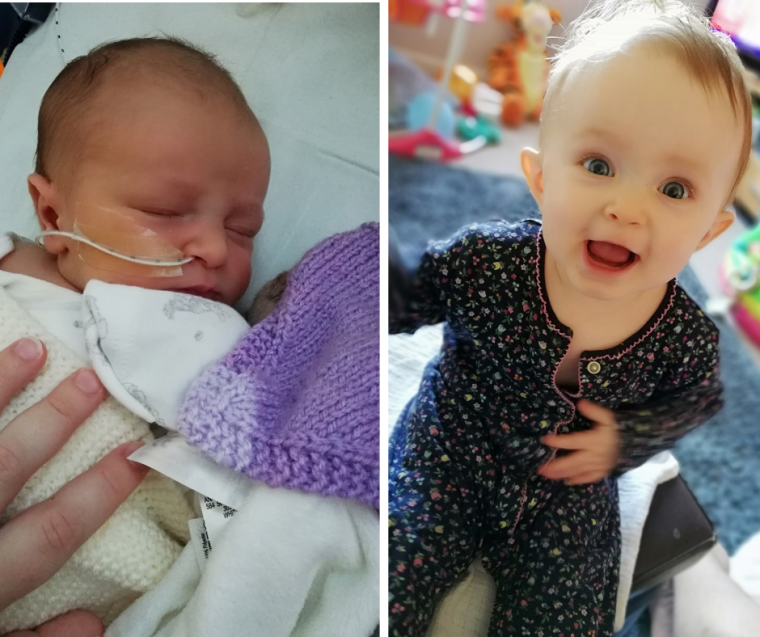 Please read our story below and see the picture of our dear Viola-Rose, one when she was in NICU aged four days old and the other when she was nine months nine days old.

Just beforehand, I began to feel very poorly and unfortunately due to being ill I don’t remember much of my daughter being born. Blood tests were taken and results were pending.

Two days after Viola-Rose was born, her breathing became very rapid and she was whisked off to NICU where her infection markers were very high and she was immediately placed on a week long IV antibiotic course until the cause could be established. She had to undergo a lumbar puncture, not 1, 2, or 3 but 4 as the first 3 times the doctor failed to check for meningitis, but eventually her cause was to be GBS visible on her skin. We were told this meant she had not been in contact with the infection long, so “how” she contracted the infection has never been solved.

My blood tests also returned a positive for GBS infection which meant a week-long IV antibiotic course as well. Unfortunately, that week we were not the only mother and child who gave birth that week on that same ward who were diagnosed with a GBS infection.

Thankfully Viola-Rose is now a very happy, healthy and bouncy nine and a half months old! But the start to her life was a very stressful one which I wouldn’t wish on anyone. Ever. “