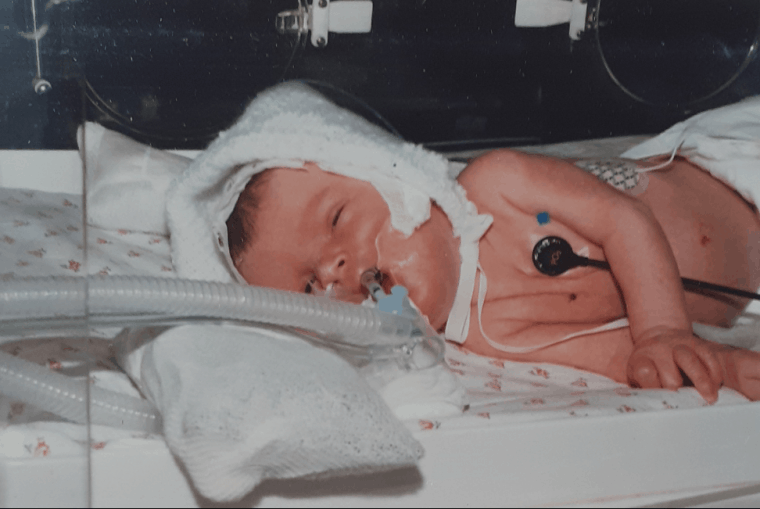 Chris and Hazel’s daughter Vicky was born on 28 June 1985. She was born prematurely at thirty-four and a half weeks and contracted group B Strep infection when she was born.

“I had never heard of GBS and it was a great shock to me and my husband – and our whole family. We lived in Eastbourne then and Vicky had to be transferred to the Westminster Hospital in London on 29 June 1985 where they had an intensive baby care unit. I followed a few days later. I was ill too and had an infection and a temperature. I was in a ward in the Westminster Hospital for a while.”

“I felt very guilty about Vicky developing this illness. Vicky was on a ventilator for ten days and had a partial collapse of the lung and blueness of the skin. She was being fed through a tube. She had some fitting which I witnessed and found very upsetting. Vicky was transferred back to the Hospital in Eastbourne on 24th July 1985 and then discharged home on 1 August 1985. We were very grateful to the NHS midwives and doctors who looked after her and saved her life.”

“For the first two years Vicky was monitored and had appointments at the hospital. During this time we moved to the Portsmouth area, where we still live. We realised she had some physical problems as she was a floppy baby. All her milestones were delayed, but she started to walk when she was nineteen months. She has a mild form of cerebral palsy (Ataxia). Her coordination was not good and she had problems with her gross motor and her fine motor skills. These problems are not so apparent now, but she does have a lung condition called bronchiectasis. Through her childhood and into her twenties, Vicky had many chest infections, but this has eased off now.”

“She is hearing impaired and has worn two hearing aids all her life. Her primary school in Fareham had a hearing-impaired unit where she could go for extra help. We realised early on that Vicky was an intelligent child. She needed physical help all the way through school and many people were involved in this so that she didn’t slip back or miss anything just because she couldn’t hear properly.”

Chris shared that the most important thing that could help families is support and counselling. “One of the effects for Vicky was hearing loss. We found support for that with other, similarly affected parents. We knew we weren’t alone, and with group B Strep more broadly, there was no one to compare notes with. To see, hear or empathise with. That’s so badly needed. Our families didn’t always realise what Vicky couldn’t do or needed extra support with – because of her physical coordination for instance. If there had been more support available, they might have understood better.

“It wasn’t until 2010 that l found out there was a possibility that all this could have been avoided. I was on Google and I found the website for Group B Strep Support. I learned about the test for GBS and I wished someone had told me about it back then. I would have paid for it gladly. I know there is a very accurate test now that you send away for and because of our history, all three of our daughters have had this test during pregnancy.”

Chris adds “A lot of the feelings never go away. Vicky is now 36 but a lot of the fears remain. Vicky tested negative for GBS but her two younger sisters both tested positive. Our youngest daughter had to make her own arrangements for the test when she was pregnant. Why is not offered as standard? It’s not taken seriously enough.”

“It was an awful time, but we were comparatively lucky. Vicky survived and wasn’t affected as seriously as some children. She has a degree, is married and has a child of her own. However, no two cases are the same and we understand that. We support the charity by giving regularly and hope to have the opportunity to help in other ways. We believe it is doing a great job supporting families and spreading awareness about group B Strep.”