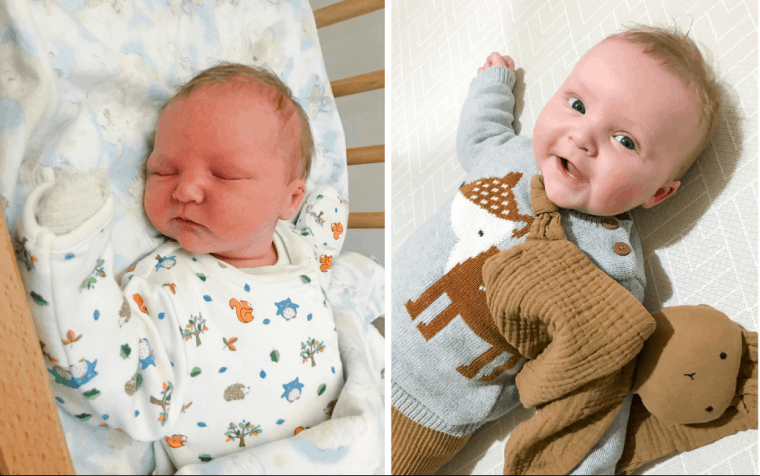 “I wanted to share our story as Ted was born by elective C-section and I mistakenly thought that this meant I didn’t need to get tested for group B Strep.

Baby Ted was born by elective C-section in December 2020. Group B Strep had never been mentioned to me by any health professionals during my pregnancy, but I had talked about testing with a friend. After looking into it, I decided that the risks of passing the infection on to my baby were tiny, so I decided not to get tested.

When Ted was born, he had pooed in his waters, so was being monitored closely by the midwives. When he started breathing rapidly and grunting at 8 hours old, he was taken for blood tests and came back to me with a cannula in his hand to start a 5 day course of prophylactic antibiotics while the paediatric team carried out blood tests, chest x-rays & lumbar punctures to find out what was wrong with him.

Over the next 2 days his health deteriorated. He was really lethargic. I couldn’t get him to wake for a feed and he stopped producing wet and dirty nappies. He ended up being very dehydrated and was put on a feeding plan, despite being 8lb 9oz at birth.

When we were told he had group B Strep infection I was so angry with myself for not getting tested. The paediatrician explained that nothing would have been done differently, as luckily, they picked up Ted’s infection early and put him on the right antibiotics, and he recovered quickly from the infection.

Luckily Ted is absolutely fine now and has had no further complications from having group B Strep infection, but I really want to let other mums know that it can be passed on to your baby, even with an elective caesarean so it’s definitely worth still getting tested.”