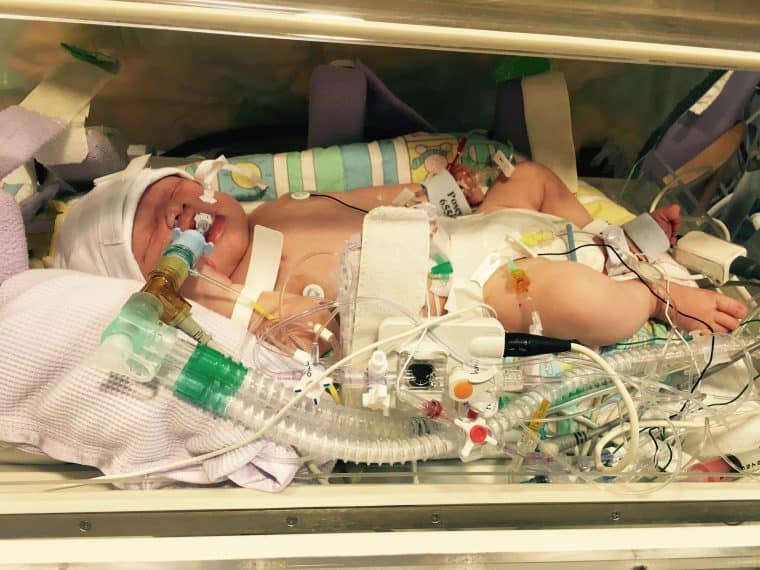 “I knew about group B Strep from 25 weeks’ pregnant. I had a swab done due to other reasons, and received a phone call to say I had something called group B Strep – it’s fine and all I would need is antibiotics during labour. I received a leaflet in the post about it and didn’t think about it any further.

It was August 2016 and it was finally my due date month! I was expecting a baby girl and we couldn’t be more ready to welcome her into the world.

As soon as she was born we were concerned. She didn’t cry. She tried but didn’t seem to have the energy to. She was purple and you could tell something was wrong. Numerous times we asked the midwife to check on her and she said she was absolutely fine – just adjusting to the world, but to keep our minds at ease she would do her observations (obs.).

Upon having her obs. checked, it was clear that her oxygen levels were dangerously low, at 70%.

Immediately Sophia-May went onto oxygen and paediatricians came up to the ward and took her away. We were told that she just needed a bit of help breathing and we could go and see her within the hour.

At this point my partner went home for some rest and I waited until we could go and see our little girl – after all she was ok?

Four hours went by and I was starting to get a bit worried now – where is my baby and why has nobody come to see me? We buzzed and the midwife came in and told us we can go down to see her now. As I arrived at neonatal I was rushed into a side room – immediately pulled away from the room my daughter was in. There was a whole team of doctors working on her.

The doctor sat me down and told me that the next 24 hours would be crucial. Sophia was in fact really poorly and she had some sort of infection. The NICU Sophia was in only had level 2 care and she needed 3 so they were trying to stabilise her to be able to transfer her to a level 3 care NICU. She had suffered a haemorrhage and they had had to intubate her to give her the best chance of survival. We found out Sophia was being treated for meningitis and sepsis caused by group B Streptococcus. I felt so guilty!

Despite having the antibiotics during labour I felt it was my fault my baby was so ill. I was also in for a week on the maternity ward due to also needing antibiotics. I was very ill myself.

Sophia spent a further week in level 3 care and she put up the biggest fight I’ve ever seen. She slowly came round, eventually came off the CPAP lung machine, she started breastfeeding and was a totally different baby! She was transferred back to where she was born for another week of neonatal care where she received the rest of her antibiotics and we were able to stay with her.

It was the hardest two weeks of our lives and it went by so slow. To this day it still makes me upset – when I look back at photos, I feel I’m looking at a completely different baby.

Today Sophia is coming up to four years of age and about to start primary school and I’m so unbelievably proud of her! She has had no complications as a result of the GBS and she’s a happy healthy little girl!

Sophia is big sister to her little brother Oliver: https://gbss.org.uk/stories/oliver/