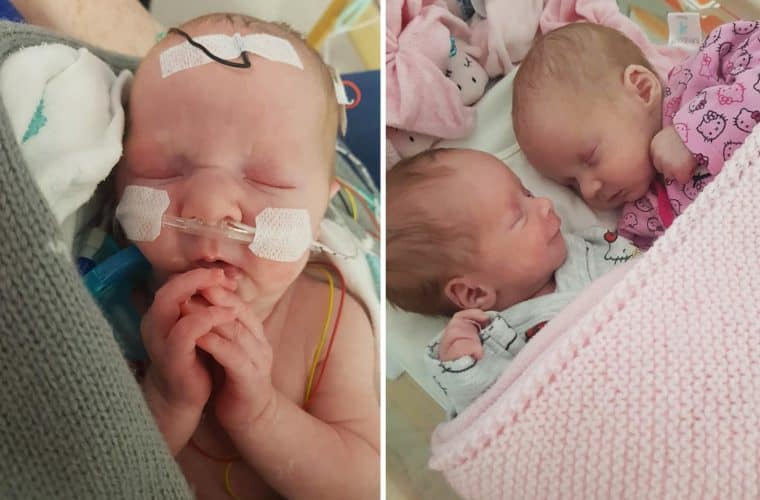 Reigyn’s mum writes, “I have 5 daughters total. My oldest is almost 9 her names Kyla. I had strep B with her. I was given a leaflet to explain and told not to worry. It was my mother who actually told me how serious it was/could be.

I was given IV antibiotics with her in labour but they weren’t given fast enough so to make sure she was given Antibiotics via a canula, she was perfectly fine and we stayed in for 4 days. My 2nd daughter is 7 and called Alyssa. I wasn’t checked with her for Strep B. In fact it’s only been through a swab for thrush my 1st was found and again with my 2nd, though it was negative with her. My 3rd daughter who is 2 called Kaylin, I had a swab for thrush and it tested positive for strep B. I was given IV antibiotics in labour with her and all was well. She had no antibiotics after and we went home the next day.

I then fell pregnant with my twin daughters Ryleigh and Reigyn who are 5 months. I had a rough pregnancy with them and was induced at 34 weeks and 1 day (I’ve been induced in all my labours). I was told as I’d had Strep B in previous pregnancies I would be given IV antibiotics in labour. My labour was total 52 mins and my 2nd daughter was born breech. Everything was fine. They were taken to NICU straight away being 6 weeks early and into incubators. They didn’t need any help with breathing and everything seemed fine.

Our twin Ryleigh who was the smaller of our 2 needed more time to learn to suck, feed etc. At 20 days old our bigger twin Reigyn who suck, fed from the start and was healthy in every way developed late-onset Strep B meningitis. We had been told for over a week we could take her home but we refused as we didn’t want to separate them. When she became unwell we were told the best thing we did was not take her home as if we had she wouldn’t be here today. She now has 30% brain damage to the left side of her brain as a result of the meningitis and seizures during.”