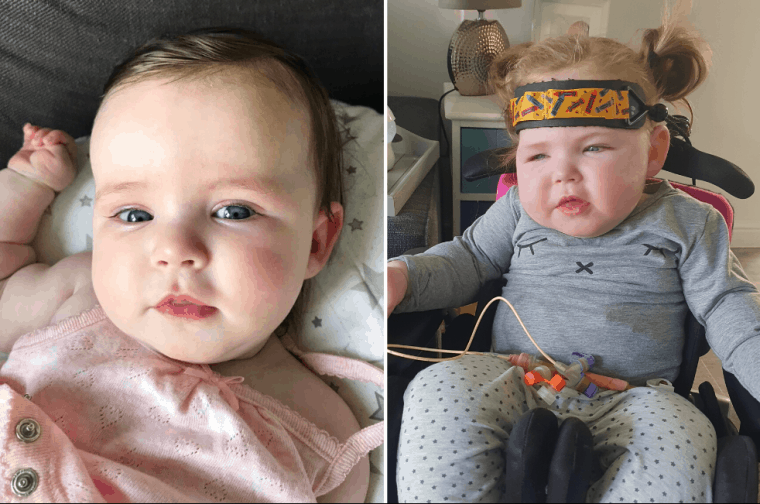 “I was never told about group B Strep, let alone tested. Nobody I knew, knew about it either. New mums, my mum, not yet mums – nobody. I had a low-risk pregnancy, healthy. A couple of instances of thrush and some light bleeding in week 8 but nothing else.

Fast forward to the day before my delivery day, I had my stretch and sweep at 2pm, as she was five days overdue. Hours after that I was in the early stages of labour. But my waters didn’t break, and we didn’t head to the hospital until 12am. 19th Dec 2018 at 6:26am Phoebe was born at Sheffield Children’s hospital. She wasn’t crying, needed oxygen and some support, she was then passed to me. I don’t remember if she looked at either of us. She breastfed fine and apparently passed all her observation checks.

Four hours later we were allowed to make our way home. She was very unsettled, wind/cholic-like, or so we thought. She fed, I think, it’s hard to tell with breastfed babies. She was so lethargic – I barely recall seeing her awake the first 48 hours. But we thought, babies do sleep a lot. The midwife also visited the day after she was born and saw no issues other than a little jaundice, bearing in mind she was there for 10 minutes and at this point she was feeding. Phoebe then stopped taking the boob and then her bottle. She was so cold, no matter how much I wrapped her up. She looked mottled and didn’t even wake or cry when bathed. She was constantly holding her hands to her head as if she was in pain.

We rang and rang the midwives after her not feeding since last night and were finally told to make our way to the hospital. A baby not feeding for over 12 hours… IS NOT NORMAL, but not one person raised this as an issue. Trust your gut. Pheebs never had strange breathing, sucking in, grunting… she just looked so uncomfortable, so in pain. She hardly made a peep.

As soon as we arrived, we were told it was some sort of infection, but had no idea of the severity. We expected to be in and out within hours and ready to spend our first Christmas at home in a couple of days. That was not to be and 2 days later her full cultures came back, lumbar, bloods… everything suggested that she shouldn’t even be alive now. She fought so hard. She had sepsis, meningitis, most importantly both of these caused by early-onset GBS. Her C-reactive protein (CRP) was the highest they’d ever seen in a baby. The meningitis literally ate away at her brain from inside out.

It took her 7 days to open her eyes after some of the strongest antibiotics were administered on a rigorous plan. 2 weeks later, we were given the dreaded news – she had barely any brain function. She would never walk, never talk. She was registered blind. She could feed from a bottle and that was it and that was down to our hard work and determination, just as much as Pheebs.

She spent two months in hospital, another 2 months on antibiotics and then the following year and a half in and out of the children’s hospital. She slept for 23 hours a day, for 23 months. She died in November 2020 as a result of her brain damage from the GBS and all of the complications that come from such a disease. Phoebe wasn’t one of the lucky ones, even though she lived. She fought so hard every single day of her life, just to exist here. She never got the life she deserved or the one we dreamt for her. This could have all been preventable, should I have known about GBS, been tested and given the antibiotics before she made her arrival.”