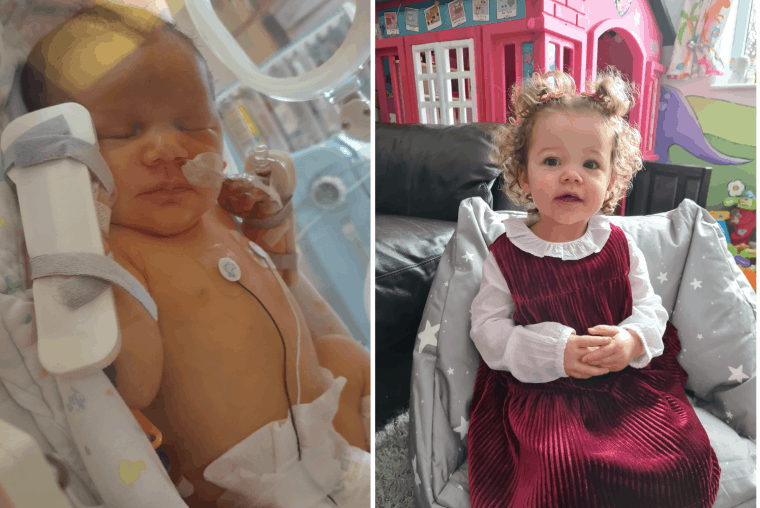 “Paisley was born April 2019 full term at 40+4, the labour was long and stressful at times due to our baby being hard to monitor. During the labour I was medicated for high blood pressure and a temperature. I was told the medication I received for the high blood pressure could have side-effects, so we would be monitored for a while after birth. Our baby was born at 9.05am and I remember when they placed our baby on my chest my husband said we have a girl. We were thrilled as we kept the gender a surprise.

She was suddenly taken to the side and examined as her breathing was a little lethargic. After what felt like forever, but may have been only matter of minutes, she was brought back to us doing well.

Later on that day she required a feeding tube due to her slow feeding and her blood sugars. We were told it could be one of the side-effects of the medication. The next morning, I asked the midwife about Paisley’s colour as she seemed a little jaundiced from the shoulders upwards, but results were clear.

That afternoon as I was cuddling her, she became really stiff for a few seconds. My husband called for the midwife. When she came, Paisley had relaxed and seemed OK. It happened again a few hours later when the midwife was present. She pressed the emergency buzzer and I remember doctors and nurses running from everywhere. Paisley was having a seizure. The doctor checking her believed it was an infection. I will be forever grateful for his fast actions. Paisley was started straight away on medication to settle the seizures and IV antibiotics for the potential infection. The next 48hours were heart-breaking, watching your newborn baby lying in the incubator wired to machines and not in your arms.

It was later confirmed she did in fact have group B Strep infection with sepsis. She was also treated for meningitis due to the brain scan showing the fluid around her brain. They attempted 4 lumbar punctures, the last one even with an ultrasound, so they could try to pinpoint exactly where to take the sample from. But each sample drew in blood which meant the results weren’t clear, so they had to treat on instinct rather than fact. I remember the consultant saying a normal infection marker is around 4 and Paisley’s was 247 at its worst.

I had a lot of guilt because for all I didn’t know about group B Strep. I had carried this bacteria that was passed to my baby. Paisley continued to receive IV antibiotics for 21 days. We did have a slight set-back when the longline got infected but thankfully with plenty cannulas, she received all her antibiotics.

Paisley was discharged from hospital 23 days after birth and monitored under a consultant until she was 9 months, after which she was discharged with no concerns.

We are and will be forever grateful to all the doctors and nurses as our beautiful clever baby girl will turn 2 in April 2021, making a full recovery from this awful infection. But I will always wonder why women aren’t routinely checked for the bacteria in pregnancy, or at the very least made aware of it. Looking back, you always ask questions, and I think having the temperature in labour 12 hours before Paisley was born and the signs of Paisley becoming poorly a few hours before the seizures started could have been indicators. But we were new parents and in the unknown you sometimes don’t question like you should.”