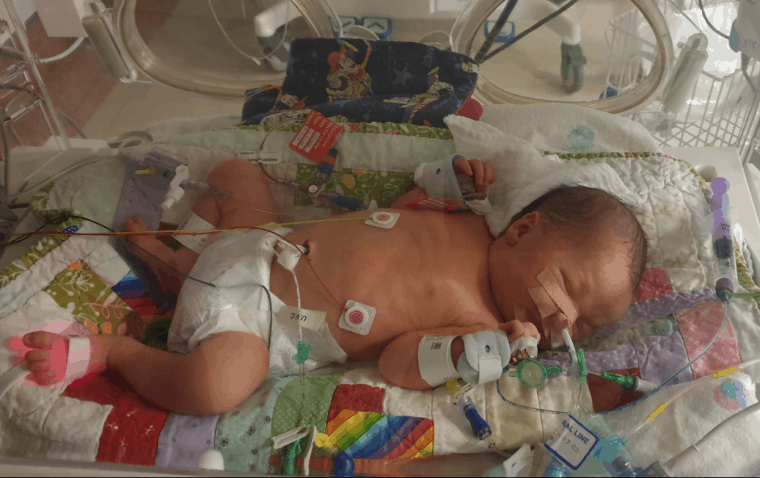 “Our son Pàdraig was born on Saturday 29th February 2020 arriving 3 weeks early, 3 hours after birth he started to become unwell.

Pàdraig was taken to the Neonatal Intensive Care Unit (NICU) roughly 8 hours after birth, he was grunting very loudly, wouldn’t feed, breathing very fast, lifeless and his colour was changing.

Less than 24 hours later we found out Pàdraig had contracted early-onset group B Strep sepsis and suspected meningitis. He had to be ventilated and we were told to prepare for the worst and that the next 24 – 48 hours was crucial for him.

Pàdraig spent 17 days in NICU where he received breathing support, antibiotics, got a blood transfusion, lumbar puncture, brain scans and that’s only to mention a few. His infection levels slowly came down. We finally got out of hospital Tuesday 17th March.

Pàdraig has been diagnosed with hearing loss and he now wears 2 behind-the-ear hearing aids. We are unsure if it came from the suspected meningitis or the treatment/medication he received in NICU.

We are very lucky & grateful that our perfect little boy, has made a great recovery, as we now know unfortunately not all outcomes are the same. We are super proud of his progress, he really is the happiest little boy!

Nearly a year later we can still remember the traumatic experience of being told our baby boy might not make it through the night and the journey to actually getting him out of hospital and now knowing that all of this could have been prevented is heartbreaking.
I had a great pregnancy, was monitored weekly in hospital as I am Type 1 Diabetic & did everything I could to keep our little baby safe. We want to help raise as much awareness as possible, so other parents don’t find themselves in the same position.

I’ve found the Facebook page and website really useful – such as learning the early signs of GBS infection and how to help prevent early-onset GBS infection.

We are forever grateful & indebted to the paediatricians and nurses in Altnagelvin NICU that helped save Pàdraig’s life. Please ask your consultant/obstetrician/midwife for more information. Don’t stop until your voice is heard.”