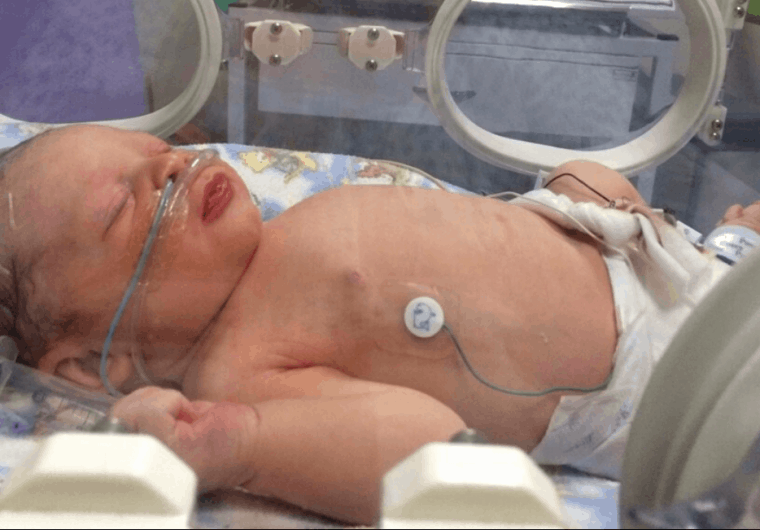 “I was completely unaware of group B Strep before Oscar was born. At 40+ 5 weeks I began with contractions and was admitted to my local hospital birthing centre later that day. My waters did not break and the labour was difficult due to Oscar being in a back to back position. When I was eventually transferred to the labour ward, I showed signs of a temperature and Oscar had become distressed and his oxygen levels were dropping. I was given antibiotics and after a failed forceps attempt, was rushed to theatre for an emergency C-section.

When Oscar was born he had to be resuscitated and was rushed to the Neonatal Intensive Care Unit ( NICU) where he was given a CT scan as the consultant was concerned the lack of oxygen may have caused brain damage. Fortunately, these came back clear however his infection levels were worryingly high and he had to have a lumbar puncture at 2 days old to check for meningitis. This again was clear, but he was treated for sepsis.

We spent the first 14 days of his life in hospital which was an extremely difficult time and I felt an extreme amount of guilt that it was my fault for what had happened to him. Fortunately, he was given the all clear and now is a healthy thriving seven-year-old. On reflection, I wish I had been more informed about group B Strep so that I could have been tested and given the antibiotics much earlier in labour and avoided a lot of what Oscar had to endure.

I am now pregnant with my second child and feel like I am armed with the knowledge and experience to be able to make a much more informed decision about my birthing choices.”