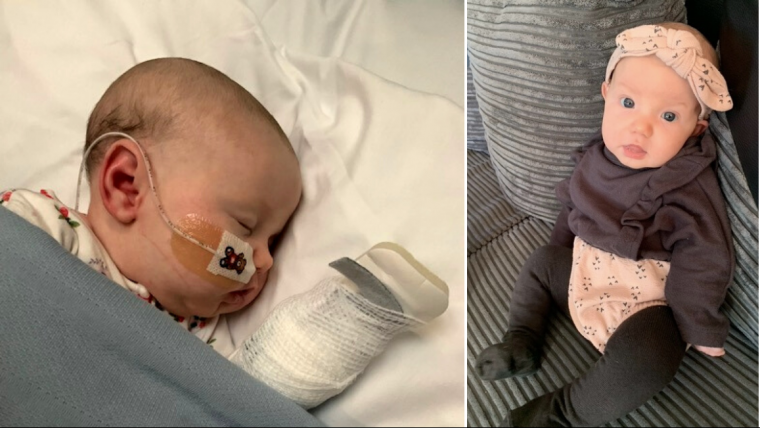 “I first tested positive for group B Strep about 29 weeks pregnant when I thought my waters were leaking. My midwife was super helpful and reassuring and made sure I had all the advice and up-to-date recommendations regarding labour and delivery. When my waters broke I received 4 loads of antibiotics and when my beautiful daughter was born she had 12 hours of observation. My hospital doesn’t screen babies unless symptomatic so she was never screened. She passed all her observations perfectly so we took her home the same day with no concerns and GBS infection not even a thought.

It wasn’t until she was about 6 weeks old that I noticed she was really mottled and she was having periods where she was really drowsy and her breathing was off. She also had a temperature, I took her straight to A&E where they made the decision not to septic screen her (although guidelines do state any baby under 3 months with a temp over 38 should be). We were observed on the ward and discharged the next day. She was still really unsettled and lethargic and just not herself. She woke up Sunday morning really struggling with her breathing so we rang an ambulance and took her back to the hospital. By this point, she wasn’t feeding properly and had fluid leaking from her ears, something which is rare in babies so young. She was also having frequent apneas.

She was screened for sepsis immediately and admitted to the high dependency unit where it was found she had sepsis, caused by GBS in her blood. It was also found in the fluid in her ear. Thankfully her lumbar puncture was negative, but it was the worst 5 days of my life. She was so unwell and had so many investigations and tests it was so awful to watch her go through that. She slowly started to pick up and we were discharged on day 5, but had to go back to the ward for a further 10 days for antibiotics through her cannula. She needs a cardiac and an audiology follow-up as she has issues, but we are praying that she has no long-term effects from this horrible infection. I plead with anyone who has it to read up on late-onset GBS and know the signs for sepsis and meningitis. It can come about so fast. My beautiful girl is so brave and I’m so proud of her.”