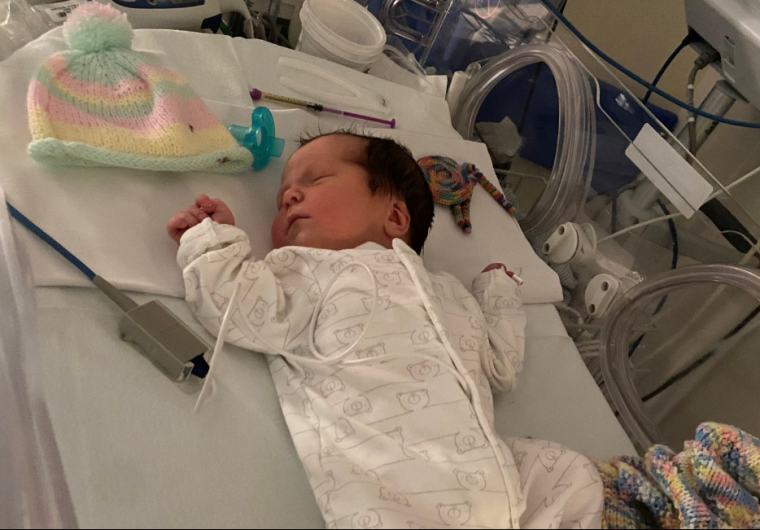 “My waters broke at 4.30am on 4th July at home, I was given an appointment to go at 12pm later on in the day as I wasn’t having contraction. When I arrived I was put onto the heart beat monitors and the other contraptions they have, and was later admitted onto the ward as I had a temperature. Fast forward to 10am 5th and I still hadn’t started contracting, I was then put on the drip to be induced. After hours off waiting and baby’s heart rate dropping and me becoming seriously ill, it was decided I would have a C-section at 4am 6th July, Noah was born at 4.55am!

He had problems breathing when he was born and had assistance, he also has a temperature, then was given to my mum (birth partner) to hold as I was so drowsy. I couldn’t lift my arms or even keep my eyes open! Because of this he was taken to the intensive care unit where he stayed being monitored. We both got diagnosed with Sepsis later on that day and they started antibiotics with us both. Because of my complications, I was also given a blood transfusion. Both our infection markers were hugely raised, causing concern and Noah’s were sent off to a Bristol children’s hospital to investigate. Then the results came back. Group B Strep infection!

We were both started on 10 days off antibiotics in hospital. Noah only needed 7 days as his infection markers came down rapidly. He had to have a feed tube put in place for the first couple of days whilst I was apart from him recovering myself. But would make visits throughout the day to see him!

Having done this throughout COVID and being a single parent – I was alone 24/7 which made the situation 100x’s harder, but the staff on both wards were amazing and supportive!

Before my birth I had no clue about group B Strep! But now I will make sure everyone I know who is pregnant or planning will be told!

I am taking part in the July squat challenge to try and raise as much support and awareness as possible! Being part of the support group has shown so many different stories all of which are unique to each individual.

I’m so glad there is no lasting damage to me or Noah and will be forever grateful for it being picked up by the paediatrician team at my local hospital!

The photo is before the results of GBS infection came back and he was treated for Sepsis.”