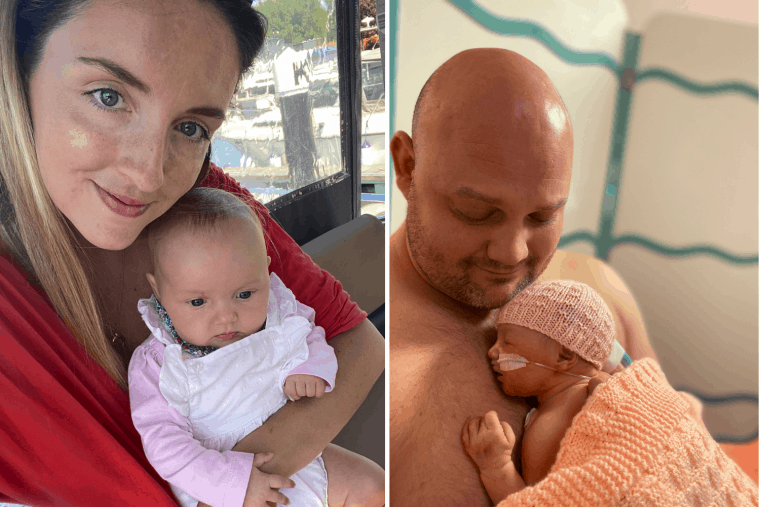 “On Tuesday 3rd March, just before midnight I woke up feeling odd. I ran to the loo and realised my waters had broken. I rang the hospital and they said because my waters had broken, they needed to see me. A midwife examined me and then to my disappointment said I was only 1cm dilated. In 9 hours I had hardly progressed but the pain by this point was truly excruciating. I cried as she told me I needed to go home again and to call back in a few hours. The midwife also said the baby’s positioning wasn’t right… she was back to back and would need to turn.

I thought, “I can’t go home…. how will I know when I need to come in given my contractions are so frequent?” I felt scared and started to weep to the midwife. After a short while, she came back into the room and said they have a spare room down the corridor that we could use and that I wouldn’t need to go home.

By this point I hadn’t had any sleep since Monday night and I was feeling so tired but the contractions were even more painful now. At 17 hours, they examined me and confirmed I was 4cm…. 4cm meant I could have pain relief… gas and air! Suddenly everything changed, the relief was incredible. I had told them I wanted an epidural, but I knew this meant I’d have to be moved from the midwifery-led unit to the obstetrics unit with the doctors. The midwives said, “Why don’t you see how you are at your next check-up at 10pm?”

I cannot tell you how much I regret this decision as things started to go downhill. 10pm came round and my second wind had started to dwindle. The next few minutes were a bit of a blur, but whatever was said, they had to get a second opinion and a sonographer. I was in serious pain now and the realisation that I was still only 4cm dilated started to kick in.

Suddenly they said my baby was face presentation – her head was facing upwards rather than tucked under and I had to be moved quickly down to the obstetrics unit. At this point I felt like my body had started to shut down… it’s nearly 24 hours since my waters had broken. They had previously said in the morning they would need to get the baby out at this point because of the risk of infection.

The pain was excruciating. Little did I know, but my body was starting to shut down. I begged for a C-section and the obstetrician just looked and laughed at me. That look of “There, there dear.” So patronising. There was no way I was going to be able to push the baby out now. My body had given up. What I didn’t realise was that I had contracted sepsis. Things were happening around me, but I wasn’t really conscious. I knew I’d had an epidural, but it felt like an out-of-body experience.

For the next three hours, I could make out that people were rallying around me. I could feel them touching me. I could hear the worry in their voices, feel the pin pricks in my arm and them trying for 45 minutes to get blood from my arm but with no luck. I could hear them trying to find an anaesthetist. It was only when I heard my husband Billy’s voice that I knew he was there trying to help me, shouting at them. My body was shaking continuously. I was freezing cold. I tried so hard to stop moving. I knew my baby would be feeling it (I knew it was bad) but however hard I tried, I couldn’t stop shaking.

And then I heard Billy say, “Why are we trying to find out what infection Anna has? We need to get the baby out.” Next thing, we’re going for an emergency C-section. But I knew things weren’t OK. They knew all these things 5 hours earlier yet continued to think my baby was going to be delivered naturally. Someone offers to take a photograph of me and Billy. I have no idea why. I’m on the operating table. I can sense Billy is seriously concerned.

My daughter Minnie was born at 4.04 am. She is taken behind me. The room is silent. She’s silent. I see a red face, so swollen and quiet. They wheel Minnie over on a trolley next to me. Her hand is touching mine, but she’s not moving. “Why isn’t she crying?” She has a Continuous Positive Airway Pressure (CPAP) machine over her mouth whilst they resuscitate her. And then she’s rushed to intensive care and my husband Billy goes with her. All I can hear is them saying, “We need to make a plan for Anna, she has sepsis”. It’s all gone horribly wrong.

I don’t know how much time passes, but Billy walks into the room crying just saying “She’s so beautiful”. I don’t ask him how she is, I can’t. At this point, she was fighting for her life. She’s in an incubator and they’re running endless tests. We don’t know if she has brain damage or if she’s going to survive and I’m lying in a hospital bed having contracted sepsis. My husband wheels me up to intensive care where I meet her for the first time. Wired up. Unable to breathe on her own. It’s heart-breaking.

We spent nine days in hospital together. Minnie spent several days in intensive care. She had the highest infection marker they had ever seen in a newborn in the hospital, most likely a chest infection. Not only did I contract sepsis, but two weeks after leaving hospital, I received a letter saying I had tested positive for group B Strep. If I’d had antibiotics at the start of my labour, I don’t believe we’d have had to go through what we did.”