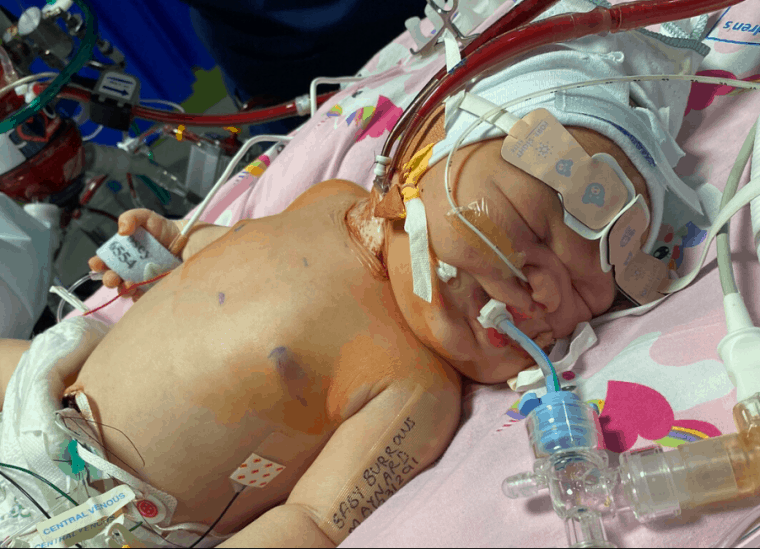 “I’d had a perfect pregnancy. It was low risk apart from one instance of reduced movements just after my due date. I had heard of group B Strep and knew it wasn’t routinely tested for during pregnancy. I just thought you needed antibiotics if you had it, so I didn’t give it much thought. After all, if the NHS didn’t test for it, it can’t be too serious.

Millie was born 10 days past her due date. My labour and birth went as I had hoped. But when she was born, she didn’t cry and we could see she was covered in meconium. The midwife said they would take her to be checked just in case but sometimes it takes babies a few minutes to cry. Within 10 minutes the emergency buzzer had been pulled and the room filled with medical staff.

Millie was quickly taken to the Neonatal Intensive Care Unit (NICU). It was a few hours later when we asked if we could see her that the consultant came to see us and explained Millie was very poorly and needed to be transferred to Alder Hey children’s hospital for Extracorporeal Membrane Oxygenation (ECMO). At this point it was suspected she had inhaled meconium and had an infection, but they were unsure of what infection. My husband was given the worst-case scenario that she might not survive. This is something I wasn’t told about until several weeks later. I don’t know how I would have coped with that, or how my husband did. He does say the day of her birth was the worst day of his life.

I was in shock and denial, after a great pregnancy and birth I was sure she’d be home in a few days.

As it turned out Millie spent a week in Alder Hey on ECMO. She was given antibiotics that were treating the infection, but we still didn’t know what it was. After a week Millie was transferred closer to home in Manchester and it was at this point we found out she had tested positive for group B Strep. We were surprised, and immediately did some thorough research and saw how many babies group B Strep infection can affect and just how serious it can be.

Millie had been deprived of oxygen when born so we were unsure of any neurological damage. She had an MRI that came back as normal. But only time would tell if there were long-term issues. After a week of ECMO, 10 days of antibiotics, intubation for a week, oxygen for 2 weeks and 4 weeks in NICU, Millie came home with just a feeding tube.

She is now a smart, feisty 9-month-old, who has no apparent lasting effects from all she went through.

I’ve signed up to the GBS3 trial group on Facebook and will happily share our story if it helps another family. I firmly believe all women should be tested. If I had been treated during labour the first month of Millie’s life could have been so different.

We are just so thankful that we had a positive outcome as it so easily could have not been.”