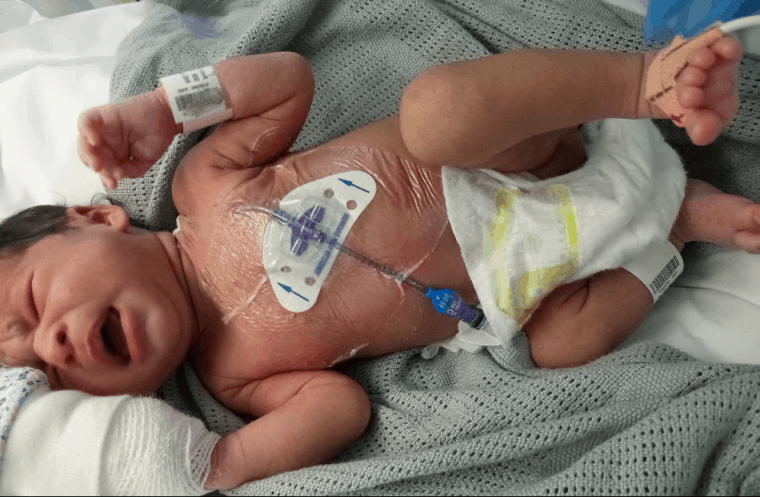 “I had what seemed like a healthy pregnancy with Miah. She was my 5th child, except I kept getting recurring thrush. I was given a sweep at 39 weeks due to being 40 but nothing happened. At 40 weeks I was induced and had Miah on the 29th of November 2020. She was born beautiful and what seemed healthy but with severe tongue tie, but she was very sleepy. She slept through all her hospital checks before being discharged. The first week she was very hard to wake for feeds often needing to be stripped down to wake up and was very upset getting her nappy changed. On day 7 we woke up she had a temp of 39.2 and was grunting and I’d noticed the day before she screamed when changing her and her legs were quite stiff.

I rushed her to my local hospital and within ten minutes of arriving they were fitting her with a cannula and giving her antibiotics and taking blood. She was then given a lumbar puncture that wasn’t successful and I literally felt my heart breaking. It was Covid rules at the hospitals so we weren’t allowed any visitors. It was so scary just the 2 of us. She was admitted to the hospital and by this point her right leg was stiff to her stomach. That night she had 2 more lumbar puncture attempts. The third one was successful. The following morning she had a scan that revealed she had septic arthritis in her left hip.

We were transferred to the Royal London Hospital that evening by ambulance where more tests and X-rays were carried out on her. The following morning, she was taken for an emergency operation to remove the infection from her hip. This was successful and they didn’t need to drill into her bone to remove any infection.

A week later her infection rate in her bloods had gone down and I was told this had been caused by late-onset GBS. she was taken for another operation to insert a PICC line through her neck coming out of her chest to receive 6 weeks of antibiotics at home and we were released just in time to spend Christmas with her brothers and sisters. 9 weeks on she reacted really well to the antibiotics and after a few more weeks of check-ups at Royal London Hospital she was discharged and seemed really healthy.

Then in April she developed a slight cold and sneezed quite a few times that evening and the following morning her leg was stiff again and she had gone from a really happy baby to crying in pain, so I rushed her over to the Royal London Hospital an hour away. We were admitted again and the following day she was given general anaesthesia for an MRI scan. I was told if they found infection in the bone they would operate straight away. That was the longest 4 hours of my life waiting not knowing what was happening alone again due to Covid rules. I was called to go down to get her and thankfully she didn’t have any infection in her hip again and they didn’t need to operate, but it seemed that because she had a viral cold it had affected the movement of her hip.

We were discharged the following day being told that this may or may not happen every time she gets unwell. I never knew anything about group B Strep before I had her and I can’t believe pregnant women aren’t offered the test in pregnancy. I would have quite happily paid the £38 for the test had I known about it. After seeing everything Miah had to go through in her first weeks of life it was heart breaking to watch so helplessly. When I researched about group B Strep I was even more heartbroken to read other parents stories and realize that even after everything she went through, she was one of the lucky ones.”