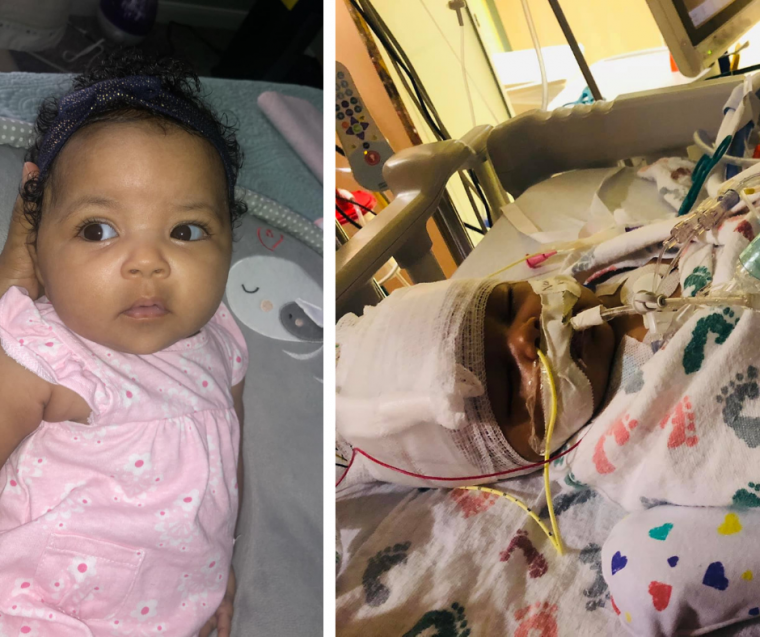 I’d like to share my baby girl story… McKayla Nate Abebe, Born at a good weight (8.34) June 18 2019, no birth issues. 3 days later we took her home… Few weeks pass…my daughter had bacterial meningitis called GBS (group B Strep). She was a healthy baby, passed her NB (newborn) screenings. Before we left the hospital everything was fine. I was tested when I was 36 weeks pregnant and tested negative. 5 weeks after she was born on ……July 22, 2019

Around 12pm she woke up from her sleep and when I picked her up she was very hot so I told her dad to hold her so I can get her temperature then when I did, it was 103. Then we dropped everything and went to her doctor. She checked everything and she said there is no infection but she said there is something wrong so she referred us to the Children’s hospital. We didn’t waste any time. We went to the ER.

They checked blood, swabs and everything came negative. At this point the doctor said there was only one thing left to do – the spinal tap. Dad stayed with her during the procedure, not one cry about everything they were doing to her and they told us we will find out in the morning what the results are from the spinal tap. Gosh that night around, in the morning I got up fed her and put her back in her hospital bed, then 30 min later her vitals started to drop, then I quickly got up and got a nurse.

She started to check the machine but I knew it wasn’t the machine, then I told the nurse that my daughter is not breathing. Another nurse came in she said the same thing, so then she pushed CODE BLUE!!! Then after that, I don’t really remember anything. Dad and I were crying and asking what is going on? There were over 15 medical staff in that room.

Then finally they put her on a life-support machine. Early in the morning the doctor came and told us that she has GBS infection and we need to start her antibiotics. A few days later they found out that she is having seizures and they would have to put her in a medical induced coma. The infection in her brain is not on the outer surface anymore. She said it’s actually going all the way inside.

We stayed in the hospital in Plano, TX until 7/26/19, then they transferred her to Dallas Children’s hospital. The next morning the doctors decided to wake her up and take her off the breathing tube. They said she will be fine. But the next morning was a different story.

July 28, 2019
That morning Mckayla’s seizures got out of control. After one day taking the breathing tube out they put it back and they did an MRI and Ultrasound. A few hours later the doctors walked into the room and sat down next to me and dad. They said there is nothing they can do for Mckayla and her brain was completely damaged by the bacterial infection. She gave her hours till the end of her suffering. Even if she overcame this she would never walk, talk or eat on her own. The only thing she could do was breath. I actually don’t remember anything after that. The next few days were very hard to take in. All our family members came together. All we did was pray and pray day and night. After two weeks went by, Mckayla started to wake from her coma and started to do the things they said she won’t be able to do. She started to breathe on her own, she started to feed.

August 15, 2019
The neurologist came into the room, sat down with us and went over the last ultrasound they did for her. She said it was amazing that she overcame this disease. She said her brain activity after all this was NORMAL, but because of the damage she would be delayed in her development but might surprise us as she has been doing since she got here. It was a relief to hear that. The next day we said goodbye to all the doctors and nurses. It was a miracle they said. One of her doctors told us the last time she saw something like this was 4 years ago.

My daughter is a survivor of group B Strep meningitis. Check when you’re pregnant ladies and ask questions because it was one of the scariest roads I’ve ever been on. This is something that happened after birth from a mother that tested negative for GBS. Please read up and ask your doctor about it.