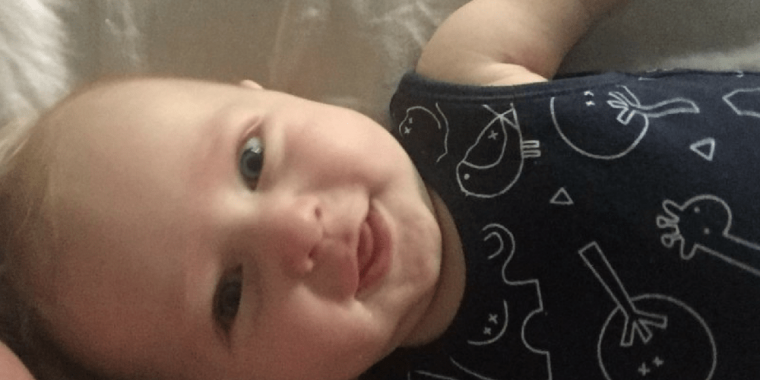 I then had a hugely traumatic birth. 48-hour labour forceps delivery and my baby ended up with 2 skull fractures and intracranial bleeding, which he fully recovered from. I thought after getting him home from the children’s hospital everything would be fine… how wrong I was.

At 25 days’ old my baby began to cry inconsolably. After 3 hours, we knew something was very wrong. At the hospital, they suspected meningitis. His entire face and neck swelled up and he was failing right in front of us. I was so scared that we would lose him after only just getting to meet him. They did a lumbar puncture and the fluid came back clear so no meningitis, but his blood cultures came back positive for GBS and sepsis. It was very touch and go for a while and none of the doctors would assure us of anything. In fact, some of them prepared us for the worst.

Our tiny boy was cannulated over and over again. They kept tissuing and we were transferred to another children’s hospital. They put a PICC line in and it failed 3 times; one of the times he haemorrhaged and bled for 45 minutes. Thankfully they eventually got it in and the life-saving antibiotics were working. He seemed to be getting better but then his temp went up again and he had another lumbar puncture. Fluid still clean. After two weeks in hospital he began to get better rapidly and I finally began to believe we would get to take our precious boy home. His infection markers went from 90 to 2 and they began to give him oral antibiotics.

Miraculously out strong boy survived with no after effects! We are so tremendously lucky. Since then I’ve learned a lot of things: most GBS infections come from the mother at birth but late-onset is much more rare and half of these infections come from somewhere other than the mother. GBS can be carried on the skin and passed on to babies by someone who had the bacteria on their hands. Two things I’ve learned are so important in the fight against GBS: screening during pregnancy and proper hand health when handling a new baby.

My son unfortunately did get sick but thanks to the care he received he survived. We are forever grateful. The suffering we endured did not end there though; there has been many after effects emotionally such as anxiety, depression, PTSD and separation anxiety. But each day gets a little better. Our baby boy is wonderful and we are so lucky to have him.