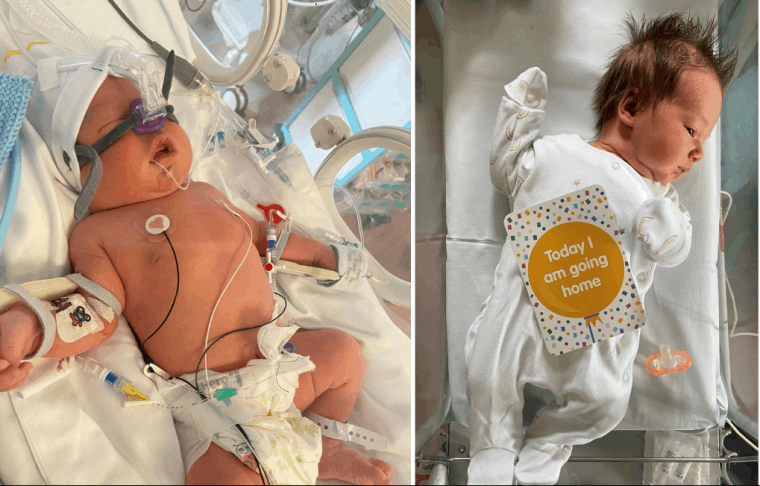 “At 40 weeks I didn’t test positive for group B Strep, when my urine was tested, following a water infection. I had heard of group B Strep infection and had even read up on the symptoms, but when it was happening to us it all seemed to go out of the window…

Leo was born at 41 weeks and was under regular observations following an ectopic heartbeat detected in the womb. He was absolutely perfect, weighing 8 lb 6 oz and with the most incredible mop of dark hair!

He didn’t take to the breast very well and within a few hours we noticed he was quite whiny and unsettled. We raised the alarm when the midwife came in and she was great – we probably owe his life to her.

Within a few hours, Leo was intubated and very poorly in the Neonatal Intensive Care Unit (NICU). He looked nothing like the healthy baby who had been born just 12 hours earlier.

We thought he was going to die.

The fast-acting team had already put him on the correct antibiotics but it was a few days before his bloods had cultured group B Strep and the diagnosis of GBS sepsis was confirmed.

We were exceptionally relieved that his lumbar puncture showed no signs of meningitis and bit by bit, line by line, Leo started to recover. To breathe on his own, to feed from a bottle, to have cuddles with us and – 2 weeks later – to come home with us as a healthy baby.

I know that we are the lucky ones because we got to take our baby home and he has no lasting effects. So now we see it as our job to raise as much awareness as possible about the signs of GBS infection and that a negative test 1 doesn’t mean you’re out of the woods!”