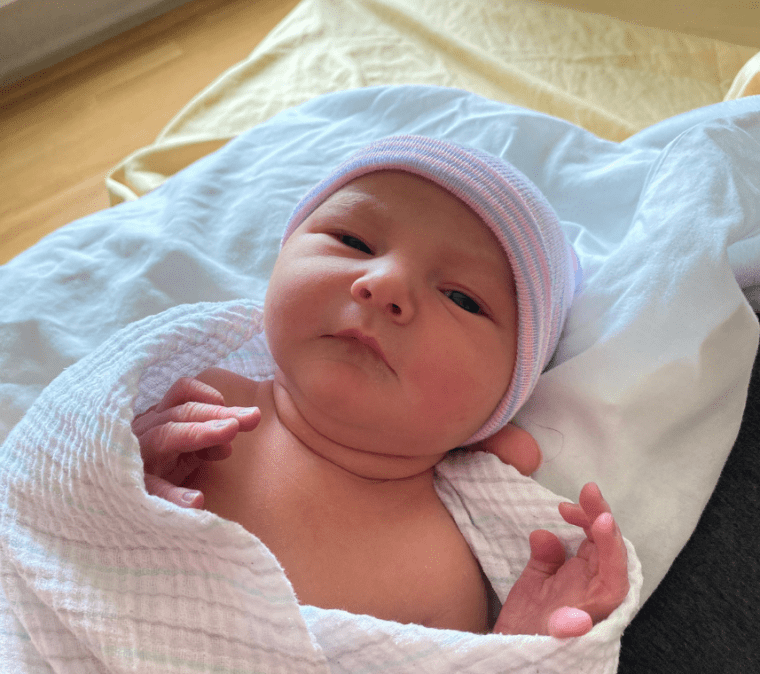 Karsen’s mum Nicole writes, “We were so happy to be bringing home our second baby boy. My labour was uneventful. Five minutes of pushing and our sweet little Karsen was Earthside.

I was tested at 36 weeks for group B Strep and the result was negative 1 – and I was negative with my first pregnancy as well.

We were discharged 24 hours after Karsen was born and I was so excited to start our new life as a family of four. Little did I know he was only gonna be here for a little while.

Around 36 hours after he was born I noticed he had a little bit of a temperature, wasn’t wanting to eat, his cry sounded a little bit quieter, and he was having such startling movements. I called Labour and Delivery and had told them about my worries and they told me that everything seemed to be fine and it sounded normal for second day babies. I thought to myself, they would know and I’m just being a worry wart. How I wish now I would have listened to my gut and rushed him to the hospital.

That night Karsen would not settle so I brought him downstairs and tried to give him a bottle as he would not nurse off of the boob and in my arms he started to have his first seizure. I raced him upstairs to my fiancé and called 911. While waiting for them to arrive, we had to give are beautiful little boy CPR to get him breathing again. Once they arrived, we were rushed to the nearest hospital and had to wait five hours while the PICU team came to transport him because he was too unstable to be transferred by the regular emergency response team.

Once the PICU team came we still had no answers and did not know what was going on with our little boy. They told us that they wanted to put him on a ventilator because he was getting too tired. So we agreed to let them put him on the vent and off we went to the Children’s Hospital.

Still unsure of what was happening, and we were greeted by a peds doctor who told us that they figured our little boy had meningitis but they figured they caught it in time because his frontal plate wasn’t swollen and they were going to do an MRI to see. After five hours of hell the doctor came back and told us that the infection was so bad, they had never seen it this bad in a newborn and said we were a very rare case, and there was significant brain damage and they were doing a spinal tap to see if they could find an infection or bacteria which came back positive for group B Strep.

We were then told our little boy was brain dead and would probably not be able to breathe on his own if we turned off the ventilator. So we made one of the most hardest choices any parent should ever have to do and we decided to withdraw care because that was not a life for him to be hooked up to machines, to be stuck in a bed. We took the pain so he didn’t have to suffer anymore. If I would have known that it was possible to turn positive after being tested negative in such a short period time I would’ve requested to be tested once weekly until I delivered1 so please If you or someone you know is pregnant please please get them to be tested weekly, so they don’t ever have to go through what we have to live with for the rest of our lives.