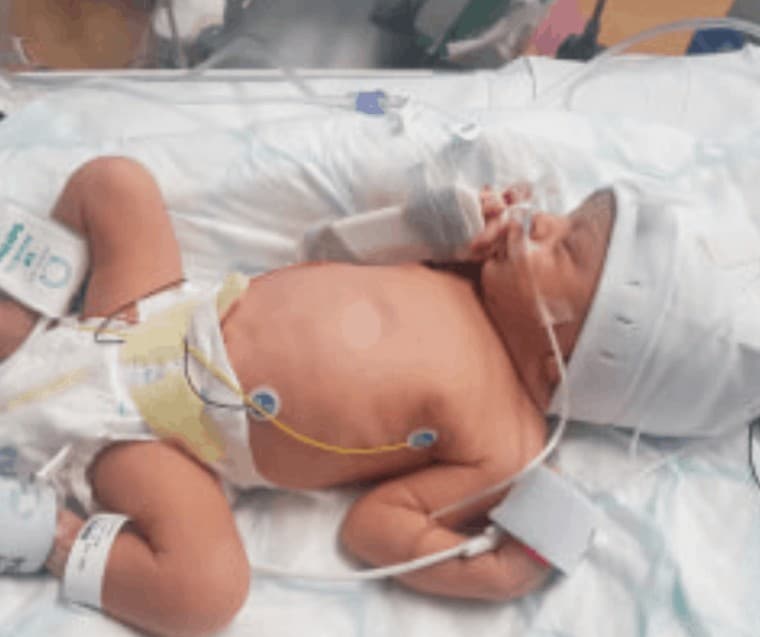 Mum Katrina writes “I just want to say what an amazing charity you are and that I hope more people are made aware of GBS! I had my first son in 2014 and had never heard of GBS. I had to be induced early with him due to static growth. I was ignored back then when I mentioned movements etc. He weighed 3lb 13oz and thankfully there weren’t any other issues except being underweight. He is now a thriving and tall 5 year old.

We then decided to try again for our second. I was worried about growth etc again but I finally fell pregnant with our daughter. I was in hospital 3 times a week to be checked on but I knew there was nothing wrong in terms of growth etc. I had numerous urine tests and it kept being sent to the lab for further testing but nothing came of it. I sort of heard of GBS at week 37, questioned it and was brushed of with ‘You’ve had one already it’s unlikely to be a problem!’

I was finally induced at 38 weeks and she arrived 38+4 days – no rooms on delivery suite, hence the long procedure, Thursday – Monday. But it was perfect to be handed my baby straight away for skin to skin and not have her whisked away like my son. It felt so surreal to be left alone with my new baby girl! She latched on straight away and it was all too perfect. We had to stay in for the night due to staff shortages etc.

The first night was a struggle. She wouldn’t settle except with me fussing on and off feeding… as she was my second the midwives didn’t even come and check on us really. Mothers instinct kicked in and I didn’t think her eye movement and breathing was normal. I went for her newborn check where she finally settled and mentioned my concerns to be told ‘No newborns are like that, she’s fine and passed all tests!’ Not long later a male paediatrician came around and said his colleague wanted him to check her breathing. I was happy for that, but he was taken back by how cute she was and said he’d never seen a baby so pretty and perfect! He said all looked fine. Within a minute after he left, she had a seizure right in front of me on the bed. I picked her up, her mouth was frothing and she went floppy! I managed to bring her around as my first aid kicked in, just as a student midwife appeared and took her. They said they wanted to take her to special care to be checked on. The male paediatrician saw us in special care and was shocked as it hadn’t even been 5 mins since he looked at her and said she was fine!! She had two further seizures within the next few hours or so!

She was put on three different antibiotics and I was questioned for all sorts! Due to the seizures she was given olanzapine I think it was, which made her extremely sleepy! No one had any idea if she would survive. The doctors had no idea what to say to us at this point except ‘Wait…wait for the test results…’. She had three lumbar punctures, countless blood tests, oxygen, her brain activity monitored, three MRIs, as she didn’t take to the sedation medication.

To be told it was GBS – something which can be prevented, yet also a common factor in newborn deaths, and the NHS do not think it is cost-effective to test women!! Was utterly heart-breaking. I was blaming myself for not doing my own research, for not paying the little £38 to be tested, for the fact I passed this horrible infection to her! She underwent antibiotics for two weeks in special care and then they allowed us to do the last week from home as I was juggling to breastfeed her, going back and forth from her at hospital to her brother at home trying to keep it as normal as possible for him!! She was classed as meningitis & sepsis, yet each lumbar puncture showed a high count, yet the result was always negative! Thank God she pulled through it all, slow at the start but then she showed how tough she was! Her MRI came back all clear the consultant didn’t believe it so it was sent to London to be looked at again by a specialist – again all clear.

So many questions, she didn’t cry when she was born but made this whimpering noise almost, was told she’s fine as it was because she had the cord around her neck and held extremely tightly in both her hands! I also kept saying I felt hot during labour and not right and was sure I had a temperature but don’t remember anyone checking my temperature and I have seen that could possibly be a sign of GBS? I didn’t have any pain relief except gas and air so I was completely aware of what was going on. She also went back to back and then got stuck, as I had no more contractions to push, so the drip had to be whacked on full to get her out. She will be seven months tomorrow and shows absolutely no sign of the horrible infection that almost killed her when she was born!!”