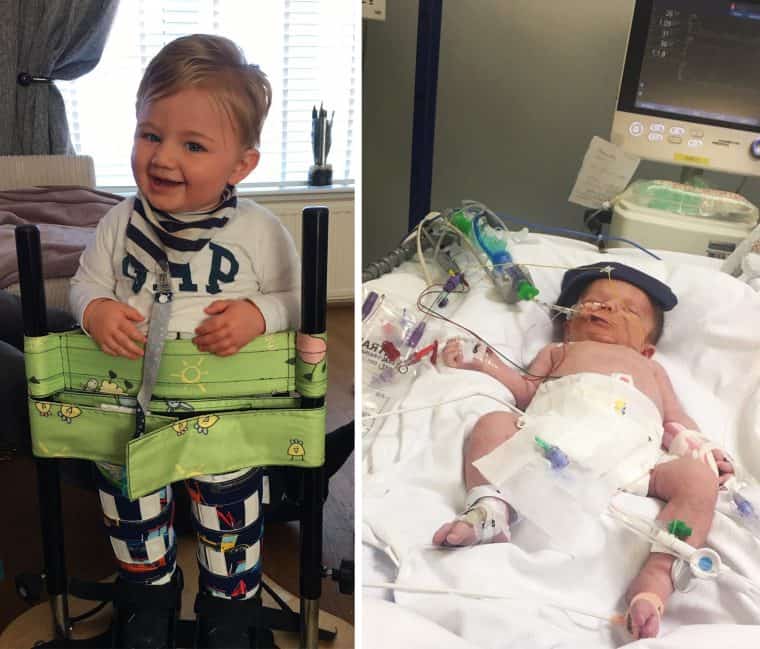 Harry’s mum writes, “I would like to share our story about our little boy Harry who developed Strep B infection at just 17 days old.

Wednesday 5th December 2018 and I was being induced at 37 weeks to have our little boy. Super excited to meet him…emergency C-section later he was here. We spent a couple of days in hospital due to him swallowing meconium, but we was home as a family of 3 on the 7th December.

Taking everything as it comes as first time parents, Harry was a good sleeper, good feeder and a very content baby. We were on cloud 9. Only thing he hated was a bath. Typical boy.

Fast forward to Friday 21st December, 8pm Harry had his bath, bottle and settled down for the evening. We went to bed around 11pm. Harry would always wake at around 2am for his night-time feed and right on cue 2am he started to stir. We changed him, he had his bottle and as I went to put him down the high pitch squeal was a shock. Never heard anything like it. We thought he had wind so I tried to wind him a little longer. Only then did we notice he had a slight grunting sound.

It was around 4am and we thought that doesn’t sound right, so my partner phoned 111, who straight away sent an ambulance. By the time it came around 4.30-4.45 the grunting had slowed and we felt bad for ‘wasting their time’ however we went to our hospital and was seen straight away by the triage nurse in A&E. His heart rate was high. We were then taken up to the children’s ward where they were going to do tests…only thing I heard was lumbar puncture. My heart sank.

He had an oxygen mask on and we weren’t allowed to be with him during these tests. Harry started to deteriorate rapidly and the next thing we knew, the doctors had put him into an induced coma to help his little body rest. The test results came back and we were told meningitis and sepsis from GBS (group B Strep). We looked at the doctors blankly. What the hell is group B Strep? They said every pregnant lady should know about this as it’s very deadly. My mind was playing over time thinking I never got told about this – I’m sure of it.

Harry was moved to another hospital where he needed special care, as the next couple days were critical. Saturday 22nd December, we were supposed to be getting ready for our first Christmas and we spent our first night in hospital hoping our little boy would pull through.

The next few days were a blur and definitely not Christmassy. Harry had MRI scans, EEG tests on his brain – the lot. And all I wanted was my little boy. He was stable but critical.

Thursday 3rd January 2019 we were told Harry was making very good progress and could come off the ventilator, as he was breathing on his own and holding all his stats up. However, come Saturday 5th, he was back on. He had developed an infection from one of his lines in his body and he needed to rest again to fight this one off too. He finally came off the ventilator 9th January and we was moved to the children’s ward. We were transferred back to our hospital closer to home on the 12th, as Harry just needed another weeks worth of antibiotics.

Sunday 20th January, after 4 long weeks in 2 different hospitals, we were taking our little boy home. It was an emotional rollercoaster.

Harry has small brain damage on the left hand side of his brain and we were told he wouldn’t move his right arm or leg and would be blind in one eye and deaf in one ear. He’s now 18 months and can move both arms, both legs and he’s not blind or deaf. He’s a little behind his peers, however, I’m forever grateful we have him here.”