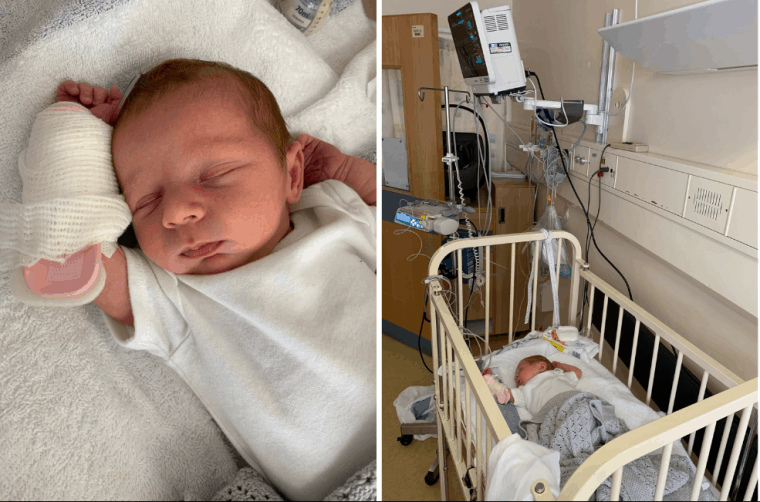 “George was born on 20th July 2020, and in that second he taught us what unconditional love was.

10 days after he was born and following the advice of 111 we took him to A&E to be checked over as we felt he wasn’t quite right. He was feeding really well and had a normal temperature, but he was very sleepy (although what newborn baby isn’t?). However, one evening he was crying unconsolably and we knew something wasn’t right.

A doctor examined him and straight away sent us to the paediatric ward for further tests following concerns with his breathing and a few grunting sounds he was making. After numerous blood culture samples were taken and a lumbar puncture was carried out to test the spinal fluid, George was diagnosed with GBS infection in the form of sepsis.

Nothing can ever prepare you for hearing the words sepsis, meningitis, or pneumonia in the same sentence as your newborn baby. These words might be frequently used terms for a doctor but for a new parent – it’s your worst nightmare.

George was immediately put onto a suite of antibiotics, three times a day for 10 days. Being so tiny, his canula kept failing and so over the course of his antibiotics he ended up having canulas in both feet, hands and arms.

Thankfully, George made a full recovery and is a healthy and happy baby but my goodness I have never felt anything like what those days in hospital put us through. Being on the ward during the COVID pandemic too meant my husband wasn’t allowed in under any circumstances, so I was a first-time mum dealing with this alone. Fortunately, my room was located on the ground floor and had a window, so my husband Carl was able to sneak over to support me through those dark moments but all I wanted was to be held (see image below).

Having not known anything about GBS prior to this happening, I was stunned to find out that GBS testing isn’t routinely carried out in the UK. Particularly given the statistics, and the severity of the illness for babies. We were one of the lucky ones, that got to bring our baby boy home, but had we been aware of GBS and offered testing during my pregnancy, we may not have had to go through it in the first place.

George turns 1 next month and we count our lucky stars every day that we have him.”