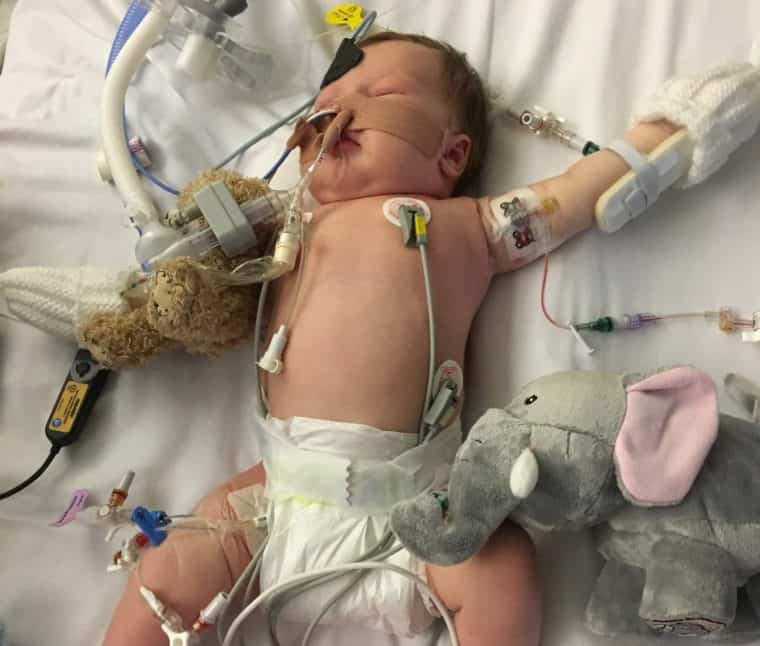 “At 16 days old, George woke at 2am for his bottle as normal. He didn’t settle the way he usually would afterwards. He cried a cry I wasn’t familiar with – after a few long hours his dad managed to settle him back to sleep but George was making a grunting noise with each breath. We both had a child of our own each and assumed he maybe had trapped wind.

Jamie, George’s dad, woke at 6am for work and I got up to make George’s next bottle. After an hour when he didn’t wake for it, I checked on him and quickly realised he had developed a temperature – 39.2. At this time he had no other real symptoms, but mother’s instinct told me this wasn’t good. I called 111 for advice and was told to get him to the GP in the next two hours. It had just gone 7am and the surgeries weren’t open yet. I woke my eldest son, threw some bits into the baby bag, and made sure we were dressed and ready to walk out of the door. George wouldn’t take his bottle. He was still very warm and just wanted to sleep.

The GP surgery told us to go straight in as soon as they opened and were amazing. They sent us on to the hospital and when we arrived, we were greeted by numerous doctors and nurses and my heart sank. I knew my instinct was right and my baby was poorly!

George had group B Streptococcus meningitis.

Shortly after arriving at the hospital, a doctor told us his thoughts and transferred George to the Paediatric Intensive Care Unit. We were shown into a waiting room and waited for what felt like a lifetime. The next time I saw my baby, he had been put into an induced coma and was breathing via a ventilator. The doctor explained it was crucial that they helped George as much as possible so his body could fight the infection. He was fighting for his life, at 16 days old.

At this time, we still didn’t know the cause of the meningitis. His blood samples had been sent to the lab for testing and after 24 hours we were told it was group B Streptococcus and that he had likely caught it from me during delivery. However, as he was over seven days old, it was ‘late-onset’. We still to this day are unsure how George contracted the bacteria.

I had never heard of GBS until the day he was in intensive care and I was staring at my baby, fighting so hard for a life he had barely even started! George spent six days in intensive care and three weeks in hospital. We very much consider ourselves lucky, because compared to many, George has got off lightly!

The meningitis has left George with damage to the front of his brain. How and whether this will affect him is a matter of having to ‘wait and see’. He is under the neurological team and they are amazing. He is meeting his milestones as he should which is reassuring. However, George’s hearing was affected. He has suffered moderate hearing loss in his left ear and has been given a hearing aid to help him hear.

Compared to many we are incredibly lucky. GBS was something I was unfamiliar with, even though this was my second baby. I will never stop shouting and raising awareness of GBS and meningitis, so parents learn the symptoms and know when to ask for help!”