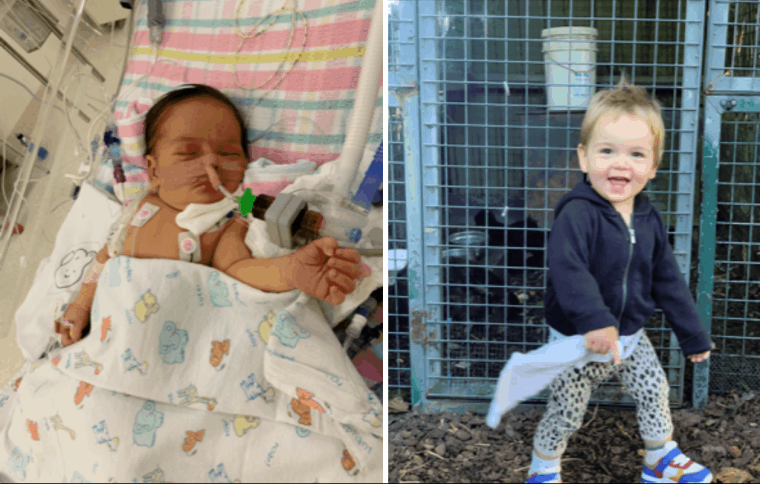 “At 37 weeks I was tested for group B Strep and was given a negative result. Before giving birth, at 39 and 40 weeks I had 4 membrane stretches. At 41 weeks pregnant my waters broke and 19 hours later Freddy was born, no antibiotics were given or offered.

Freddy was born beautiful and healthy. Freddy is my second child and I kept saying to the midwife and my family I can’t believe how sleepy he is. However, he seemed to be healthy and well. On day 7 of his life, he was screaming in pain. My midwife visited for a routine check and we thought it was wind pains as he only wanted to be held by me (his mum) and was screaming in pain. Then he went to sleep. I kept trying to wake him to feed but he wouldn’t wake. His last feed was at 5 am.

It was 9 am and I took his temperature and he wouldn’t really wake. It was 38.8 degrees C so I immediately took him to the hospital. We got there at 9:15 am and we were seen by the nurses and doctors straight away. He seemed OK. They were doing all the routine checks. They had to do a lumbar puncture and began giving antibiotics. Then while we were there, Freddy began to deteriorate in front of the doctors. He wasn’t able to breathe and then all of a sudden, they were setting up for resus. I couldn’t believe my eyes. My heart and mind could not connect to what was happening to my healthy baby boy.

We were at a local hospital, and they said they were getting doctors and an ambulance from the biggest hospital in Australia to come and collect him. This hospital was 1 hour away. When the ambulance arrived, the doctors came in, placed Freddy in an incubator and put a pic line in and intubated him as we were rushed to the Brisbane Children’s Hospital. Everything the doctors had said could be a worst-case scenario was happening right in front of our eyes. It was heart-breakingly shocking, every second.

In Brisbane Children’s Intensive Care Unit he was intubated for 5 days. During that time Freddy had MRIs, heart scans, brain scans, and more lumbar punctures. The doctors found that Freddy had GBS sepsis and meningitis. Every day, waiting for the news doctors had, just broke our hearts every second. When Freddy was taken off intubation and moved to the ward we had 3 weeks of antibiotics.

We were so lucky we were in hospital by the time Freddy was becoming extremely unwell and he deteriorated extremely quickly in front of the doctors. The doctors and nurses were more than amazing. I am so thankful I trusted my mother’s instinct at home, and I was aware of the signs to look for in an unwell baby and go straight to hospital without hesitating.

Our baby boy went through so much and made a full recovery and he is strong, happy, and thriving now. It has been a stressful year waiting to see if Freddy will make each milestone and he has. We are so lucky and grateful for every day with him.

It’s so important that parents be aware of group B Strep and its dangers to their newborns. It’s so important to have a GBS test during pregnancy, even though I was negative I would still encourage mums to get tested in the last 5 weeks prior to giving birth. I don’t believe from my experience that mothers are educated enough on GBS. Seek advice and never second guess yourself. Trust your instincts and act fast.

It’s hard for me to talk about this but I feel so strongly about the awareness, I’ve never felt so much fear and heartache in my life seeing my baby unwell.”