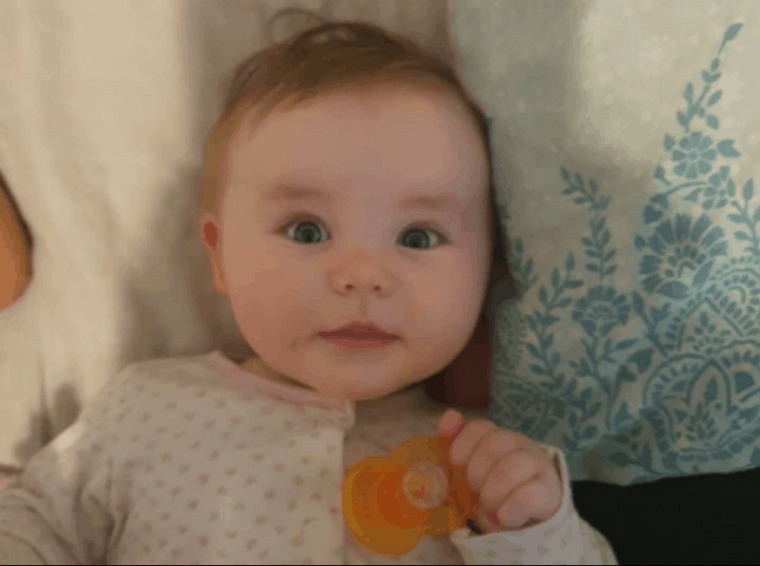 “Evie was born healthy in the Royal Victoria Hospital in Belfast, though a few hours later I started to present as sick, getting high temperatures and convulsions. As a precaution when a mother presents unwell less than 24 hours after birth, the baby gets treated as well. The first 24 hours after her birth were a blur as I was so unwell, but the next day doctors told me they had taken bloods from both me and the baby. They had shown my baby did have an infection, but they needed to culture them to find out what it was and we just had to wait for the results.

I think it was the following day that we were told that my baby had tested positive for group B Strep – something I had heard of and knew it was dangerous, but I didn’t know a lot about it. I was distraught when I first found out and was so worried as I didn’t know what this really meant at the time. Evie had to be moved to the Neonatal Intensive Care Unit (NICU) for antibiotics and to have a lumbar puncture to test her spinal fluid for meningitis. The results came back clear thankfully.

Evie had to spend two weeks in NICU to get her antibiotics. This was during the second lockdown and only me and her daddy could visit until I started to get unwell again and I tested positive for COVID.

At the start, I was devastated that I wasn’t able to bring my baby home and that I missed those first few weeks at home. I also wasn’t able to collect my baby and bring her home from hospital when her course of antibiotics had ended because of COVID. Neither was her dad. My cousin had to collect her and drop her at my door and we all had to isolate for 10 days afterwards.

However, I’m so thankful. Looking back now, in hindsight, if I hadn’t presented sick after the delivery, we would have never known and we would have brought our perfect girl home and she would have gotten sick. And I dread to think of the outcome then. Someone was looking over my Evie then and I’m just so glad it wasn’t a different outcome. She is a happy healthy baby but things could have been a lot worse for us.”