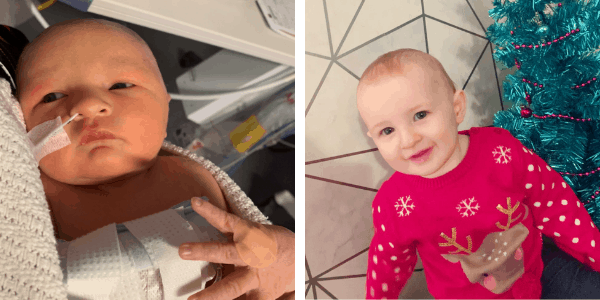 “I had been a mum for less than twenty-four hours when I learned about GBS. I fell pregnant in April 2019. I am overweight and throughout my pregnancy, I was reminded that my weight was a risk to my child. But I had a textbook pregnancy. No high blood pressure or gestational diabetes. My little girl was measuring “big” and it was suggested I be induced as full-term spontaneous labour could risk the safety of my little girl.

I had my waters broken around 10am on Sunday, 22nd December 2019 and by 4.41 pm, my 8lb 5oz bundle of joy was here – Evie Marie. The feeling of relief was overwhelming knowing that she was here, and she was well.

I tried to breastfeed for the first time, but Evie would not latch on. My pulse wouldn’t settle, so the staff were focused on me, and by 4am we were moved to the ward. I tried to feed again. Nothing. We tried formula. Nothing. And then the crying started. She had the most piercing cry. Upon reflection, she is a very laid-back baby – this should have been the warning sign.

Evie’s check-up with the doctor was at lunchtime. We were so excited at the prospect of going home but the doctor shut the door. My heart sank. Her words inflicted a pain I had never felt. Infection. Blood. NICU.

Evie was quickly put into an incubator, fitted with a cannula, and a feeding tube. We were told that she was given a cocktail of antibiotics as they suspected what her infection was; it was very common in newborns. Her doctors explained to me they thought Evie had group B Strep infection. I had never heard of it. I remember the pain that coursed through me; I was wracked with guilt throughout my pregnancy because of my weight and here she was fighting off this terrible infection and it was not my fault. On 23rd December, the results came in. It was GBS infection.

Around 4am on Christmas Eve, Evie had a lumbar puncture to discover if her infection had spread to her spinal fluid. My emotions were heightened as it was Christmas. All the nurses in Christmas regalia, the music, plans for celebration teas … I ached. I should have been at home putting my little one to bed for Santa coming and here I was filled with resentment.

Christmas Day arrived, and I felt so low. Wearing a Christmas jumper, holding a teddy, I felt inadequate; what a first Christmas. Evie had had a bad night and had been put on oxygen and another feeding tube. I wanted it to stop. The Christmas music. The merriment. The happiness. My relatives came for visits and I was wracked with guilt for ruining their Christmas.

However, we were lucky. Her infection hadn’t spread. Around lunchtime, Evie came off her tubes and by 9pm on Christmas Day, she was moved to the Special Care Baby Unit. The prognosis was positive. She became stronger, her infection lessened, and all our dreams came true on 30th December when we brought our little girl home.

Our luck continued. Evie’s health visitor believed she didn’t need additional care. She was thriving. After her six week check-up, her consultant signed her off.

Evie is a success story and her daddy and I are overwhelmed with gratitude. But it could have been a very different story. Raising awareness of GBS is very important to us as we want to ensure that no babies have to needlessly suffer at the hands of this infection.

This Christmas, I said I would help the charity raise money so they can get the word out to more doctors, midwives and parents. If we know about GBS, we can be tested and take steps to protect our precious babies.

Will you please make a donation this Christmas?

With your help and support I’m hoping to raise £5,000. That amount could help get information packs into the hands of thousands of people. If that leaflet could help just one family get a test and help protect their baby…that would make Evie’s first Christmas at home even more special. Knowing her story can make such a difference to other little ones like her would be a magical Christmas gift for our family.”