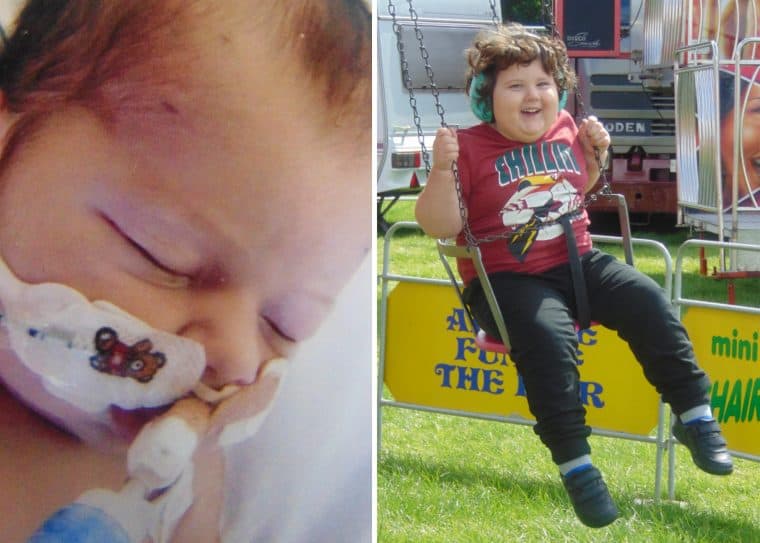 Evan’s mum Rachel writes, “14/10/12, Evan was sleepy with little interest in feeding but at two weeks old we put it down to being just that. At 3.30pm he started crying. He refused milk and appeared to be straining, so I rang a midwife who advised ways of relieving tummy ache. Nothing worked. We rang 111. When they returned our call advising us to go to the walk-in centre, we were already on our way. Evan’s cry had become high pitched and there was no comforting him.

Upon seeing the doctor, he stopped crying and pooed; we thought he was okay. But during examination he was whimpering and fretful when touched. The doctor asked, ‘late baby?’ (he was, induced at 42 weeks) ‘I’ve met babies like him before’ he said and took his temperature. ‘That’s odd’ he said and took it again. He told us to go to A&E, adding that it wasn’t meningitis because his ‘fontanelle wasn’t bulging’. He suspected a water infection.

On route the grunting started. By the time we arrived around 9, Evan’s temperature was 39.5, his skin mottled, his hands and feet cold and his breathing laboured. He was started on a broad spectrum antibiotic and given paracetamol to try and lower his temperature before undergoing a lumbar puncture. While waiting he fed for the first time since midday before falling asleep. Again, we thought he was getting better, but he repeatedly awoke and then started vomiting. He was moved to high dependency at 11pm and throughout the early hours he continued to vomit and develop seizures. We were told that Evan had meningitis and sepsis and that the next 48 hours were crucial. The utter helplessness of being able to do nothing but watch and wait was and is simply heart-breaking. It wasn’t until the next day that we were told the cause of infection, GBS.

GBS had been mentioned to me by a midwife, but only with regards to keeping my wounds clean after birth. No mention of threat to baby or signs of infection were discussed. I became symptomatic with an infection that originated in my breasts three days before Evan became ill, and as I was feeding, expressed milk at the time. I suspect his infection came from me. I had a negative vaginal swab taken during Evan’s illness but as it was not an ECM test and taken when my infection markers were decreasing, I doubt the result. My milk was never tested. The HV had put my symptoms down to ‘not pumping enough’ and never suggested I should stop expressing.

By 6am it had become clear that Evan needed more help and a chance for his body to rest. He was intubated and transferred to a CICU in another hospital. Evan spent the next 9 days ventilated and had cooling treatment while his infection levels were lowered, and seizures brought under control. An MRI at 3 weeks revealed the damage was worse than anticipated. He had suffered damage throughout his brain and was not expected to sit unaided, let alone walk and he would have learning disabilities. After finishing his antibiotic courses back at our local hospital, Evan was discharged.

At almost 8 year old, Evan has had input from all areas; paediatricians, physiotherapy, occupational therapy, speech and language therapy, psychology, endocrinology, audiology, and ophthalmology. He overcame all odds to take his first steps at 25 months, but he has learning disabilities, received an autism diagnosis aged 3 and experienced a resurgence of seizures aged 5. He will never lead an independent life. The challenges he faces are part of who he is; the most amazing person who we have the fortune to call our son. But it undoubtedly gets harder as he gets older and while we wouldn’t change him for the world, we would certainly have the world change for him, if only to make his world a more comfortable and easier place to inhabit. Our beautiful boy, always. x”