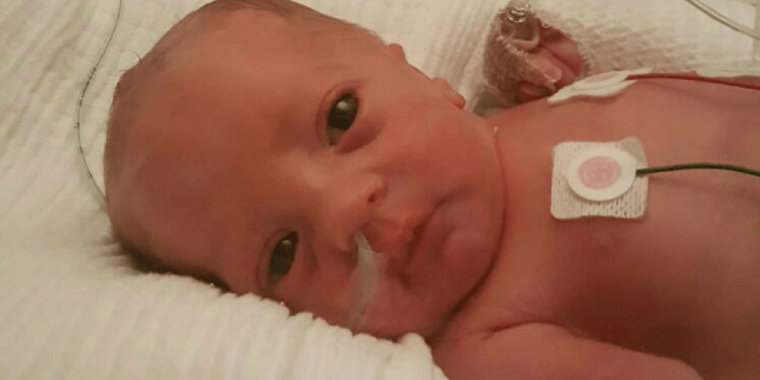 At 31 weeks pregnant i went into spontaneous labour with my son. I laboured well and after 15 hours Elliott was born safely and admitted to neonatal care. Immediately after the birth I started to display symptoms of sepsis, vomiting, shivering, disorientation and a high temperature.

Elliott progressed well in neonatal care until two weeks after the birth when he started to show signs of sepsis, he was grunting and had a high temperature. He was ventilated and put onto antibiotics; a lumbar puncture was attempted but failed. Before falling ill, his eyes had been weeping and a swab had been taken; this swab was found to contain Strep B. He was then treated for late-onset Strep B.

When I was told my son had Strep B, I had no idea what it was and had never heard of it. It was a shock to see him so poorly after making such good progress and I found it extremely difficult to see him hooked up to all the monitors and breathing apparatus. I did some research and found the GBSS charity and information about the illness, I couldn’t believe I had had three children and wasn’t even aware of Strep B, nobody had ever mentioned it in any of my pregnancies and I had never heard it spoken of or seen posters or leaflets. I was frustrated to discover there was also a test for this and that it’s cost was relatively inexpensive and simple to do and although I later found out this can’t prevent late onset I now know it could save the lives of babies at risk of early onset.

On the same day that our son fell ill with late-onset Strep B, I was admitted with signs of sepsis again. Although all tests results came back inconclusive, I was put onto the same antibiotics as my son and my infection improved. Luckily my son also responded well to treatment and continued to thrive on neonatal once again.

Unfortunately, he was taken ill again at 6 weeks. He was pale and distant and, when checked, his blood oxygen levels were dangerously low. After a successful lumbar puncture and blood tests, late-onset Strep B was confirmed again. This second blow came again as a huge shock. I was upset and blamed myself for our son becoming ill again, thinking it must have been something I’d done wrong. Doctors explained to us how rare it is for babies to be affected twice by late-onset GBS and, because of this, they decided to test my breast milk for colanization of Strep B bacteria. My milk was found to contain high volumes of colonised GBS.

It was at this time that I contacted the GBSS charity to speak about my son’s condition and to ask advice about breastfeeding. After the phone call that morning, I went to the hospital feeling so much more confident than I had in days and feeling that I wasn’t alone in our journey.

Despite being offered treatment for my breast milk we felt so frightened by everything that had happened in the past few weeks that unfortunately we didn’t feel confident enough to continue with breastfeeding.

Our son improved massively and at 8 weeks, and after two more weeks of antibiotics, he was finally ready to come home from neonatal. My husband was excited to bring him home but after everything we had been through, I was frightened the infection would return again and that there would be no help at home if he fell ill again. Luckily for us our neonatal team and outreach nurses were an amazing support and with each week that past I felt more and more confident that Elliott would be ok.

Elliott is now 16 weeks old and thriving. Reading positive GBS stories from the charity helped to get me through our really bad days so I would like to share our story to give other people the hope and strength to keep going and the information they need