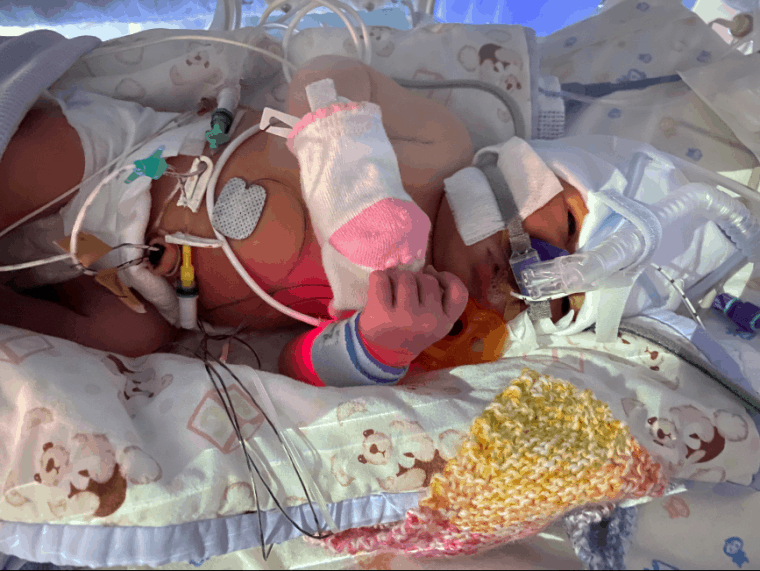 “We had never heard of group B Strep, until we nearly lost our daughter shortly after birth.

Having endured the stillbirth of our firstborn, Fern, in 2016, we were blessed in 2021 to be expecting our second rainbow. Pregnancy and parenting after loss is tough and fraught with worry. You do not have the ability to rationalise your fears, you just believe you will lose another child. Due to previously losing our daughter and pregnancy complications I was closely monitored throughout my pregnancy and had various different tests, but not once was group B Strep mentioned.

In January 2021, after a relatively smooth labour, we welcomed Eira into the world and she appeared to be fit and well. However, 5 hours after birth she started grunting and struggling to breathe, and the crash team was called.

I remember around 15 people rushing into the room as they started to work on her, taking over her breathing for her. It felt like all our fears were coming true and we were once again going to lay to rest another child. I remember begging the consultant not to let my daughter die.  Eira was rushed to the Neonatal Intensive Care Unit (NICU) where the wonderful staff at Ipswich hospital worked tirelessly to keep Eira going. After a few days, the results were in to confirm she had group B Strep infection and her treatment was then tailored specifically to treat the infection.

I knew nothing about group B Strep, but I blamed myself and felt like I had done this to my daughter. The doctors assured me this was not the case but as a mum, I really struggled feeling I had passed this onto her. I was also angry that, despite all of the tests I had during my pregnancy due to my previous loss, I was not tested for it and that this simple test could have saved my daughter all of this suffering.

One of the doctors printed me some literature from the GBSS website and it really helped me to understand what we were dealing with and to understand it wasn’t my fault.

Fortunately, after 2 long weeks in NICU, Eira was going from strength to strength and was able to come home on oxygen. She is now a happy 5 month old and whilst she is still under the care of the hospital, she is doing amazing.

We know we were some of the lucky ones, the staff’s speedy action undoubtedly saved Eira’s life. We were told numerous times once Eira was on the road to recovery how very lucky we were.

I wish I had been more educated on group B Strep as I would have funded a test myself if the NHS would not offer it to me. The work GBSS is doing is so important and raising awareness undoubtedly saves lives and will spare other families having to endure what we did or worse.”