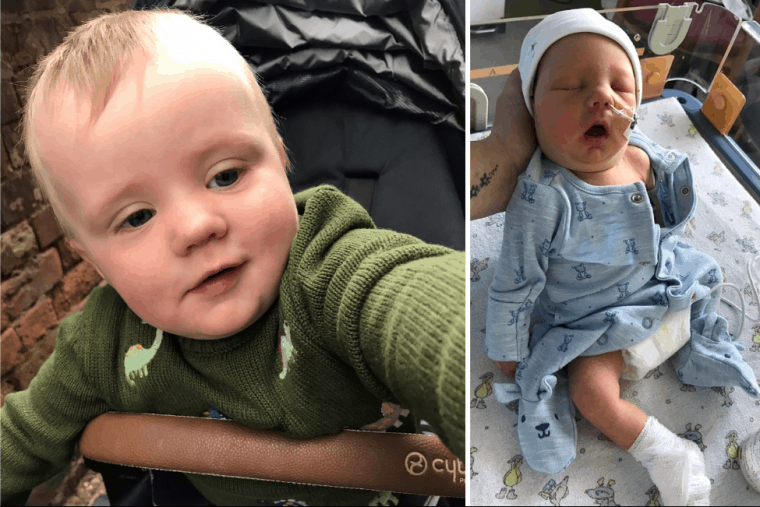 “Ciarán was born 12th April 2019 at 34 weeks by planned C-section after a very turbulent pregnancy where I spent most of it on bed rest in hospital. I had previously had a 28 weeker so knew the pregnancy would not be plain sailing.

His birth itself was a very traumatic event, Ciarán had to be resuscitated and was rushed off to NICU. I hadn’t even seen his face.

We had been home for a week and I was in the blissful new baby at home stage just trying to adjust to life as a Mam of three. Ciarán fed a lot but just didn’t seem to be putting weight on, he was always cold and I felt like I was failing at feeding him, but I was determined to keep going. I kept getting told to top him up with milk. I was torn as I really didn’t want to, but I also wanted him fed and to thrive. I had a lot of health visitors visiting all week. On the Friday night I knew something wasn’t quite right. Ciaràn wasn’t waking as much for a feed and he felt really cold. I phoned my Neo-natal nurse on the Saturday morning and explained my concerns. She said she would phone the on-call consultant. I just remember saying to Tommy that something is not right. I had a gut feeling so we went straight into hospital which would later be the best thing I ever did – Always go with your gut feeling. As a mother, you know your child best.

The next few hours were a blur there were so many doctors and nurses around my little man’s lifeless body. He had sepsis and his body was shutting down. They pumped so much drugs and fluids into him, but they couldn’t figure out what was wrong with him. We went to PICU for a while and met one of the most amazing consultants. I can just remember thinking I’ve seen you on the telly. The whole night passed in a blur. I didn’t know what was going to happen. I was sitting next to my baby fighting for his life while trying to pump and get some milk for him. I couldn’t believe I was back here again where I had been two weeks earlier. Why was this all happing again?

The next morning the consultants came in to tell me Ciarán had group B Strep and meningitis. I couldn’t take it in. How? Why? Had I done this? I remember listening but not hearing anything. They were starting him on IV antibiotics which he would need for the next two weeks. He also needed a lumber puncture and more tests, and they were not sure of what the lasting effects would be. But we had caught it quickly and would have to take one day at a time. My little peanut was so swollen from all the IVs and fluids that he’d had pumped into him.

I sat and Googled to find out more. It was explained to me that Ciarán had what is called late-onset group B Strep infection. This occurs after your baby is 6 days old and beyond.

When we were in transitional care, Ciarán had many issues with feeding and controlling his temperature. He also struggled with his breathing, which meant he had to work harder. His chest was going in and out so hard that he used to grunt a lot. I got told by a doctor that he had something called Pectus carinatum (known as pigeon chest). This is not the case, he does not have this and no one ever mentioned it again. Did they miss something, was this the cause of his GBS, I guess that’s something I will never know.

Group B Strep is something I believe women need to be informed more about throughout pregnancy as it can have such serious consequences. We were one of the lucky ones. We got to take our baby home. But this is sadly not the case for everyone. There needs to be more awareness about this infection out there and pregnant women should be tested routinely.

I will always remember the doctor saying if you hadn’t have brought him in when you did it would have been a whole different story. They caught it just in time. Always trust your instinct. This is something I went on to do again eight months later. This again saved my little man’s life. A mother knows best.”