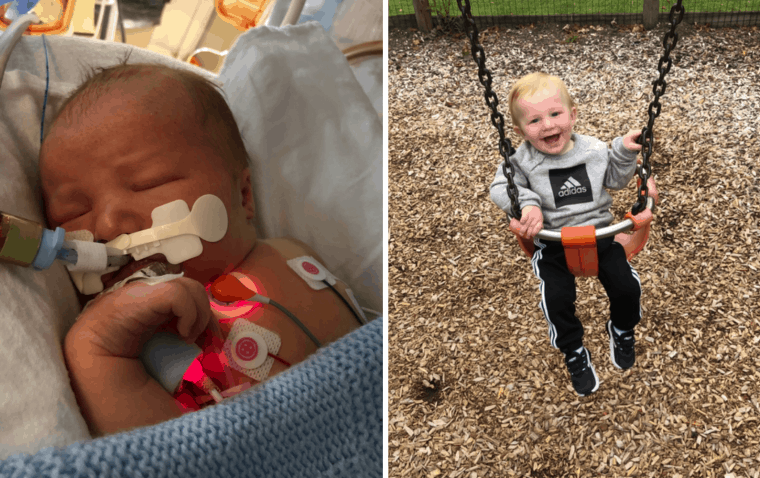 “Chesten was my 4th baby. I was induced at 38 weeks’ due to having big babies. I found out I had group B strep in my second pregnancy and was treated in my second and third birth promptly. I arrived at the Royal Berkshire Hospital in Reading for my induction on the 28/08/19. Before being touched I asked for my antibiotics. I had the pessary inserted around 1.30 pm and started contracting that evening. I was told I didn’t need antibiotics until I was in established labour, so I contracted throughout the night.

The next morning my waters broke at 9.30 am. I begged, screamed and shouted for antibiotics because I was scared. I was only 5cm at this point. In the end I was finally given antibiotics 1 hour before I pushed him out, and our midwife stated “better late than never”. My baby boy was born at 12.26 pm weighing 9lbs 3oz. He came out grunting and he wasn’t picking up his colour. I knew straight away something wasn’t right.

I lost a lot of blood and had to be rushed to theatre to have my placenta removed. By the time I came out of surgery, my baby was up on Buscot Ward, the special baby care unit. They had no idea what was wrong. He ended up on oxygen cannulas with all these wires. I was so poorly myself I had to be wheeled up to see him. It absolutely broke my heart. At 16 hours old, he suffered from a left side pneumothorax (collapsed lung). He had a chest drain inserted and had to be intubated. The hospital still said they didn’t know what was wrong with him and said they couldn’t keep him at our local hospital. As he was seriously critical, he was moved to the John Radcliffe (JR) hospital in Oxford. When we arrived there to meet Chesten, we were told he had pneumonia. On day 3 he took a turn for the worse. They thought he had meningitis. He had to have a lumbar puncture. The results came back clear. I felt so broken. I sat by his incubator every day staring at him, grieving over my sick child, helplessly miles away from home and my 3 older children.

Roughly on day 6, he was weaned off morphine and slowly woke up. He came home on day 10. We were told it should not affect him long term. Then when Chesten was 11 weeks old he caught Respiratory Syncytial Virus (RSV) bronchiolitis. Day 7 his right lung collapsed, and he was intubated and rushed up to the JR again. When we arrived, they told us they were taking it hour by hour. He’d contracted pneumonia again. He received a blood transfusion and was on 100% oxygen again.

Chesten made a full recovery after 2 weeks spent in hospital. We went home, then continuously every 2/3weeks Chesten ended up in hospital on oxygen suffering with back to back bronchiolitis until he was 7 months old. He’s 15 months old now and we are on our second winter. He suffers from colds every 3 or 4 weeks and is on inhalers, but he’s thriving. This is my story.”