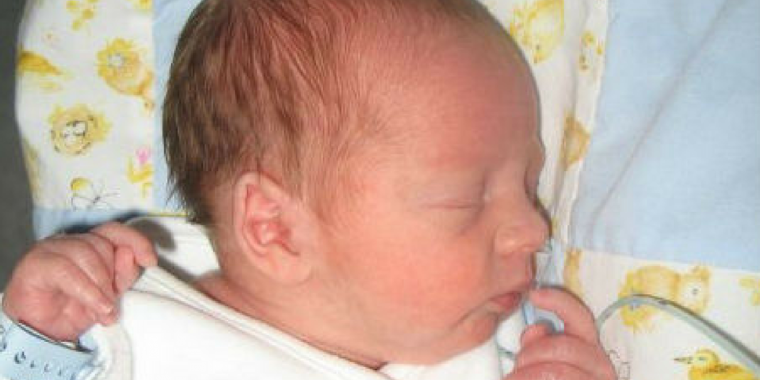 Our second child Cayden was born on the morning of 7th April 2008, at 32+1 I was not expecting his arrival for another few weeks! We were rather shocked but very happy to meet our son. When he was born he was rushed off to SCBU. He needed a little breathing and feeding help. As the days and weeks went by he grew stronger and finally I was ecstatic to hear he would soon be well enough to come home!

Two days later we went to visit Cayden – aged 20 days – as usual. He was very grumpy in the morning and had a high-pitched cry, which was unlike him. Then we noticed he looked very pale and cold, but he’d had problems keeping his temperature stable and looked pale from jaundice so we didn’t think much of it.

That evening he looked paler still and had been sick. Worse of all his breathing was irregular and he was panting. I asked for a doctor to check him and so the duty doctor was called. He just said to do some bloods in the morning and I felt reassured. I returned home to express some milk and when I rang back to check him I found he was with the doctors and was not doing very well. Looking back over the day I now realise the symptoms were coming out and on photos he looks very ill. I now know I should have got him help much sooner and I feel awful thinking he was just being grumpy when his little body was being attacked.

The doctors worked on him through the night. At one point we were asked if we wanted him christened and I now realise he almost died during the night. The hospital chaplin came the next morning; Cayden’s daddy and I stood by his incubator while she carried out the baptism and we cried throughout. The doctors were struggling to control his blood pressure and I later found out there were concerns over brain damage. A team was called to transfer him to a PICU at another hospital. It took them five long hours to move him into his travel incubator and then they drove away in a special ambulance with the blue lights going. We followed slowly behind terrified of what it all meant for him.

When we arrived he was unloaded and the doctor was with him. We saw the doctor a few hours later. He asked us questions relating to pregnancy and family history and we talked about how well he had been doing up to that point. Then he told us Cayden was fighting a serious infection, that he was unresponsive and his eyes were not moving, something that showed signs of brain damage. It was at this point I think the doctor said he suspected GBS and possible meningitis. He asked us to consider a DNR order for Cayden and stressed that he didn’t think Cayden was going to recover from the infection and if he did, he would be severely brain-damaged. My world finally fell down around me as I realised our baby boy had a very slim chance of recovering.

Cayden was stable overnight but he was on three or four drugs for his blood pressure and they still couldn’t stabilise it, and the oxygen levels on the ventilator were quite high. The next morning the doctor performed a brain ultrasound and showed us what he thought was abnormal area. He said they needed to do an MRI scan to be certain of the extent of brain damage, so we gave our consent.

While we were waiting, we used the computer in the parents’ room at the hospital and looked up GBS. That’s when we came across GBSS and their fantastic website. Looking at the information there, I knew deep down that Cayden did have late-onset GBS and meningitis. We’ve since had amazing support from Jane and her team at GBSS.

About 5 o’clock the same day we met with a doctor, she informed us that the MRI scan had shown severe brain damage and that Cayden would have very little quality of life if he survived. I remember saying, “‘he’s not responding, moving his eyes or breathing for himself, he’s never going to recover is he?” And when the doctor answered “No”, that was the moment I knew we had to let him go. We didn’t want him to suffer anymore. At this point GBS was confirmed from blood cultures taken the night Cayden fell ill. The doctors also suspected meningitis but we would have to wait for the post-mortem to be sure.

We were present when the nurse removed all the tubes and dressed him in the same blue stripy sleepsuit he was wearing two days earlier when he fell ill. Our family were able to come in to say goodbye. The nurse removed the ventilator and took a photo of him with his teddy bear. I picked him up for the very last time, and carried him into a quiet room. Our family were there and we all took it in turns to say our farewells. Some of our family had a cuddle, others gave him a kiss goodbye. My mother-in-law had her first and last cuddle at the same time. Everyone was deeply sad and upset and no-one could understand how this had happened so quickly.

The results of the post mortem showed Cayden did have GBS meningitis and septicemia. He died aged 22 days on 29th April 2008 and that day a little bit of us died with him. We’ll never get over Cayden’s death, but one day we’ll learn to live with it. We’ll always remember him as our son but our lives will never be the same again. We are shocked to the core without our son in our family.

Quite a few years have passed now and we’ve learned to value the important things in life. We have our daughter Megan, and since Cayden died we’ve been blessed with 2 more amazing sons called Toby and Archie. Toby was born 2 days after Cayden’s first anniversary and we gave him his big brother’s name as his middle name. As the children grow, we’ll make sure they know all about Cayden, their brother, the special little boy who fought so hard to stay but sadly didn’t have a chance to stay.