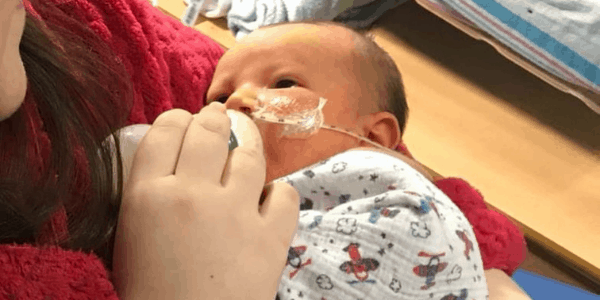 Zoe writes “December 2017, my first child Theo was born. Little did we know in the awe and overwhelming love of a newborn, that he was desperately ill.

My birth was long, I had some complications but Theo was born a “healthy” 8lb 9.5oz baby at 9:41am. He was given antibiotics as I triggered the sepsis barrier within labour. We had visitors as normal and everyone was happy but I thought Theo’s breathing was a little fast.

I had asked a midwife to check and it was within the normal range but on the cusp of being too fast. I had asked my sister, who is a paediatric nurse, to have a double-check and this is where she agreed with me that it wasn’t “normal”. From here he was taken for an X-ray where they found a “black mass” which they believed it to be constipation.

The next morning he had a heel prick test where the doctor seemed concerned about his cry, I mentioned this also as it sounded higher than the other newborns but nothing else was said or done. A few hours later (into the night) whilst changing his nappy his cry seemed a lot higher and a nurse came to soothe him as I had no sleep. I managed to get some sleep but was woken up but the Paediatric Doctor on shift to explain that whilst I was asleep Theo underwent a CT and a lumbar puncture.

It was from here where my concerns were listened to and it was confirmed he had Bacterial Meningitis and Sepsis due to me being an unknown carrier of Group B Strep. He was taken straight to the Special Care Unit where he spent two weeks on aggressive antibiotics. He reacted to the antibiotics straight away, thankfully.

Theo passed his hearing test and the scan on his brain came back clear.

A year and a half on we still need to be mindful he could have slight disabilities due to infections but he’s such a happy, funny boy, he makes me so proud. Even writing this, it still haunts me as I do believe if I hadn’t had contracted sepsis and got discharged with my concerns not being heard, Theo would not be here.”