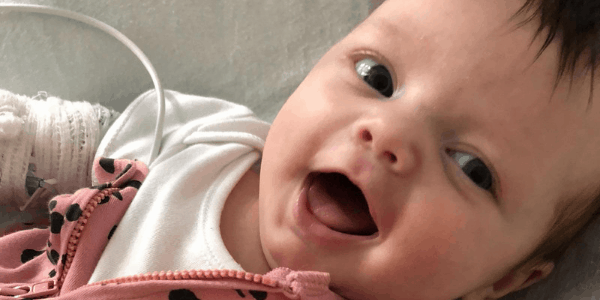 “7 weeks and 6 days old our Nellie is her usual happy self. Playing like she does, feeding and napping as usual. Anyone who meets Nellie always says how content and calm she is. Nellie had just started learning to smile and laugh, grabbing and reacting to colours and noises.

3am on Wednesday 29th May, Nellie wakes up for her night feed – nothing out of the ordinary. I take her into her room to feed her still her smiling self. She drinks some of her bottle, I change her nappy and take her back into our room to lay her down in her next to me crib, Nellie finally nods off around 4am. I continue to stay awake to ensure Nellie is asleep.

4:30am Nellie stirs again my first instinct is she is now ready to finish off her bottle. Routinely I lift her out of her crib whilst I do so Nellie now starts crying. This however is unusual for Nellie who would very rarely cry. I again take her into her room to feed her but cannot calm her down. Dad who never wakes during the night feed as Nellie is always so quiet comes in shocked with what he is hearing and is instantly concerned. During this time Nellie’s eyes are fixed closed. I turn on the main light to which she always reacts too but not this time there is no reaction this is when my concerns were heightened.

Moving around the house to try and comfort her we made our way downstairs and into the dining room. Once in the natural light, we could see the colour of Nellie and she was getting paler by the minute still crying a sound we had never heard. I took her temp which showed 37.7 and started to undo her baby grow and take her legs out to risk her from getting a high temp, whilst doing so I also checked her body for any rashes which there wasn’t.

30mins or so had past and Dad decided that we call the ambulance. At this point we never expected that our quick reactions were what saved our Nellie. I packed her nappy bag with some bottles and the ambulance arrived within 20 mins. Paramedics came in and did a few routine checks but didn’t seem relatively concerned. They took her temperature and it had reduced to 37.1.

I traveled in the ambulance with Nellie and Dad followed closely behind in the car. Whilst in the ambulance I was asked several questions about Nellie and myself including questions about my birth and complications etc. I explained Nellie was 12 days early but was perfectly healthy that I had a very straightforward pregnancy and birth apart from testing group B strep positive around 31 Weeks however Nellie was given IV antibiotics at birth for 5 days in hospital to cover her from the risk of infection.

Once we arrived at A&E I was asked to explain what had happened. Whilst doing so Nellie was still inconsolable her skin was becoming more and more mottled and her temperature rising greatly she also begun having difficulty breathing this was apparent from the dips in her chest. We could tell something wasn’t quite right but again we were by no means prepared for what was about to happen once we stepped out of the triage room.

We were taken to a doctor for Nellie to be examined and she was deteriorating by the second making grunting noises that just wouldn’t go away, she had stopped responding and her eyes were still tightly shut, hooked up to a monitor to check Nellies pulse, oxygen levels and temperature almost instantly her oxygen level dropped and all I recall hearing was the word resus.

I had Nellie in my arms from the minute we were taken in the ambulance and I was not letting her go.

Now we were panicking like we had never panicked before just hearing the word resus I automatically thought the worse it was only two hours ago that Nellie was laying in her crib smiling at me and now she is fighting for her life what was happening?

Stickers all over her chest hooked up to monitors, a big medical team were around the bed discussing how to treat Nellie. Fortunately for us the doctors acted fast and she was instantly given antibiotics to cover her for all possible infections including meningitis and sepsis something that had never even crossed our minds. Certainly not meningitis as I relate that infection with a rash.

Nellies heart rate was high her temp was scorching at this point 39.1 and her breathing was deteriorating she was then put on oxygen to increase her levels. I had to hold the mask onto her tiny face, this was the most heartbreaking moment this was then changed to an automatic flow which was placed up her nostrils and plastered to her face for ease.

Still holding Nellie I could hear the doctors in the distance discussing her options, as I looked to the right I could see Dad and family members looking on, faces full of fear and tears. I remained looking down at my little Nellie in my arms singing our Nellie Belly song to her and trying to ignore what was going on around us, keeping myself calm as to not affect Nellie whilst at the same time dying inside, hoping it was all a nightmare.

A few hours passed, more tests on Nellie were done, a chest X-ray was given and slowly her pulse began to lower and oxygen levels increase still with a high temp but with a slow improvement due to all the medical equipment being used on her.

All of us still unaware of what was happening to Nellie, how this has happened so sudden and what will happen. Questioning myself if anything had changed or if I had noticed any difference in Nellie throughout the day… but there was nothing. The doctors informed us the signs were leading to an infection and so she is being treated as if she has the worse infection in order to be protected.

When doctors thought Nellie was stable enough we were taken up to the children’s ward, Nellie was so pale and her face so sad, still crying and grunting. The next day Nellie was given a lumber puncture to check the fluid around her brain and bloods to determine what exactly the cause was.

Results came back and Nellie had late onset group B Strep meningitis….

Thankfully after the most testing 14 days of our lives what with Nellie on IV antibiotics, watching new cannula’s being fitted daily into her hands and feet, her temperature rising for days on end, numerous bloods taken and a final LP on the 14th day Nellie had shown a miraculous recovery and we were discharged from the hospital.

Nellie will still need follow ups to check her progress and development but medically she is doing great. It will take some time for Nellie to adjust to being back home after all the trauma she went though, 14 days away from home is hard for anybody let alone an 8 week old baby but we are grateful to have our baby girl back home and continue life as a family.

In the UK one baby a week will die from group B Strep infection typically sepsis, pneumonia and/or meningitis this is why I am taking part in the ‘steps against strep’ challenge, no parent deserves to watch their baby suffer like we did or go through even worse.”