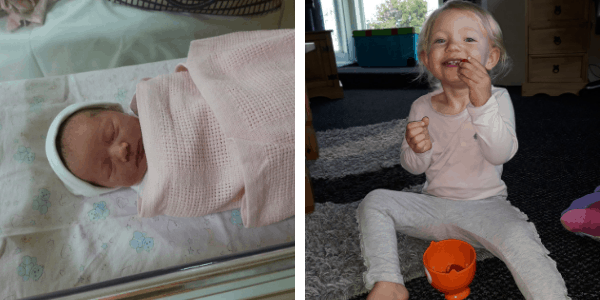 Courtney writes ” I am a mother of 2 children. One is 2 in September and the other is 6 in November.

I spent 1.5 years trying to conceive my now almost 2 year old daughter and at around 25 weeks pregnant with my her I went into hospital due to having a horrible thread worm infection that wasn’t easing and caused me severe discomfort and depression. I was told to take the medication to kill the worms as they thought the risk of problems it may cause out weighed the risk my depression could cause. I was adamant I wouldn’t take the medication because if my daughter was then born with any issues, even if unrelated to the medication I would blame myself.

Instead they took some swabs and sent me away with some cream. My swabs were vaginal and just done due to some discharge I’d been having also. Only a few days later I received a call. They told me I had a thrush infection but also that I had group B Strep. I had no idea what this was I asked for more info. They told me a pack would be sent to me with some stickers to stick on my maternity pack.

I hung up and cried. I was so scared for my daughter. Scared it was some how my fault. Later that day I told my partner and he was very worried and scared he didn’t know what it was either and reading online didn’t help.

At my next midwife apt my midwife explained it more and how I was lucky to have found it and that antibiotics would be given through IV during labour. I felt some relief after that.

Fast forward to 37 weeks 6 days pregnant. I was sent to hospital after a second time of reduced movements that week. After 6 hours there the doctor said it was best to just induce my labour. I was given a paper. Sent home and told to return the next day at 10pm.

I slept next to my son that night crying that I wasn’t ready. It was too soon and I didn’t want him to feel pushed out (he was 3 almost 4) Just normal emotions I think. The next day at 8.30pm-ish I kissed him goodbye and went with my partner to the hospital. I had an amazing (but painful) induction and labour experience there.

At 38weeks 3days, so after 3 days of induction and the extra contractions it caused, I gave birth to my daughter with no pain relief and within 10 mins of pushing she was here. Most painful day of my life but also one of the most amazing and happy days of my life.

I was on antibiotic drip and as soon as she was born although I was happy, I was upset as I looked beside me that my partner didn’t smile, he didn’t show any emotion, he just stood there. She hadn’t cried yet and he was worried. He said he thought something was wrong and that something bad would happen due to the group B Strep worry. We had to have a doctor from the children’s ward come and assess her just to put his mind at ease. She was just perfect. We felt so blessed and lucky.

After the birth, me and my daughter stayed in hospital a day and a half longer to check she didn’t come up with symptoms. She didn’t. But at 5 days old we were back in hospital as she had an infection and mild jaundice. We are unsure if it would have been anything to do with group B Strep but she was given IV antibiotics and monitored for 3 days.

On her 1st birthday we felt it was only fitting to have a part of her birthday buffet with cakes, leaflets, balloons and a charity box for donations. After a party of just family we managed to raise £20 in change to Group B Strep Support.

I’m blessed to say she is now a happy healthy almost 2 year old and I feel so blessed to have caught GBS in a swab.

Thank you GBSS for all the leaflets and info during my pregnancy. I will continue to support this charity as my main charity.